A lot of skill and a little good timing have brought success to Thomas Brown.

In 2006, he was named to the board of American Technology Corp. (Nasdaq: ATCO), bringing with him 16 years of experience at Sony Corp. (NYSE: SNE) and more than 10 years at PricewaterhouseCoopers.

A few months later, the board chairman asked him to take over operations.

"The reason it appealed to me is I saw a lot of potential in the LRAD business," Brown said. "At the time, we had a second-generation product that we (then) redeveloped and redesigned."

Brown was right. There was potential in the LRAD, or long-range acoustic device, business.

With the new product and a clear vision, Brown was able to bring the company success and create a business he said both employees and shareholders could feel good about. 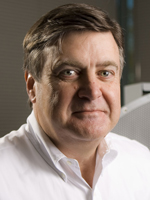 "This product and this little company has been the most rewarding position I've had in my career," Brown said. "It's an opportunity to take something and try to make it successful."

The LRAD products are designed to broadcast clear messages 100 meters to 3,000 meters away. It has practical applications for law enforcement, military and civilian purposes.

The company first started selling the product to the military. It now has branched out, selling to those in areas of commercial shipping, perimeter security and other such industries.

Today, the company's LRAD products are used around the world.

"In Haiti, units are being used for search and rescue and crowd communications," Brown said. "Obviously, the situation down there is pretty dire, and the military is trying to communicate with a lot of people."

Following the successful pirate attack on the Maersk Alabama off the coast of Somalia, the captain recommended at a Senate hearing that all ships use LRAD. His crew implemented LRAD into its deterrence and protection plan just in time for a second attack. This time, the crew prevented the attack.

Success stories and user-recommendations are the best publicity for American Technology, Brown said.

"With this type of product, because it's such a niche type product, we need results from true situations to give us some marketing," he said.

The company is breaking into a new market, using LRAD to keep wildlife away from dangerous areas. Again, a near-tragic incident gave credence to the need for Brown's product.

"Just coincidently, we announced LRAD in wildlife the same day the plane went down in the Hudson," Brown said. "Birds have been damaging aircraft for years."

Many attempts have been made to chase birds off the runway and keep them out of the airspace, but Brown said LRAD is proving to be a much better tool at protecting the birds and the planes.

LRAD also is being used around mining operations to keep birds out of contaminated ponds.

And with wind farms popping up all around the world -- often in a migration path -- there is potential to use LRAD around the perimeter to keep birds away from the dangerous blades.

The company is in the early stages of developing the wildlife market, but Brown said it already has had some successes, and he sees this as a big opportunity.

Locally, the San Diego Sheriff's Office uses LRAD in search and rescue operations. And the military uses it at the beach on Naval Air Station North Island to monitor activity and warn civilians before they cross onto base property.

"We're trying to go after every application we can think of," Brown said. "At this stage, we're branching out into all areas we see possible uses."

At the same time, Brown is keeping the company focused on one area to maximize success.

The company offers two other products -- the SoundSaber and HSS -- that Brown said have very limited markets. While he will continue producing these products, he said LRAD would be the main focus.

In fact, the company is in the process of changing its name to LRAD to reflect the brand recognition it has build up around the LRAD line of products. Shareholders are expected to approve the name change at the end of March.

Meanwhile, Brown will keep looking for new ways to grow the company and break into new markets.

"Over the next several years, we're just trying to develop the market we've talked about before and grow the business to a reasonable size," he said. "Stay focused, continue to provide strong customer service and develop markets.

"Hopefully we'll grow to a reasonable size and make it very profitable, and then we'll start figuring out what we do next."