If you've ever gotten in a car accident, chances are Autadex has the data on it.

The company makes software that auto insurance companies use to generate repair estimates. Audatex has information and databases on just about every make and model -- and their parts -- going back to 1970. The company claims most of the top 10 auto insurers as clients, so they handle a lot of accidents.

But if you're not familiar with the wide world of auto insurance software, you're not alone. Mike Salfity, managing director of Audatex North America Inc., headquartered in Carmel Mountain, had never heard of the company until he was told about the job opening through a head hunting firm. He came to Audatex six months ago after 25 years with Xerox (NYSE: XRX), and said he was pleasantly surprised with what he found.

"I had people call me after I left (Xerox), senior executives of different companies in that industry saying, 'What are you doing? What are you thinking?'" he recalled with a laugh. "I told them, 'You know, it's just one of those things that felt right.'" 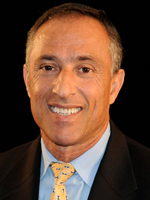 Salfity said he was drawn to the thirst for innovation at Audatex. The company is essentially in the business of helping insurance companies reduce their costs. It does this by reducing the time between a customer calling in an accident report and getting his car repaired and home again.

When drivers get into an accident and call their insurance company, the insurer sends out an estimator. The estimator is able to estimate the damage -- or determine if a car is totaled -- based on Audatex's databases and calculations. In Europe, an auto damage estimate is actually referred to as "an Audatex," just as people often call tissues by the brand name Kleenex.

But at its heart, Salfity said the company is really about technology and information, and Audatex North America is trying to use that technology and information to expand the company's scope. For example, Audatex North America also provides a yard management software, which helps salvage yards keep track of inventory. This helps body shops more easily locate auto parts, and the company has a partnership with eBay (Nasdaq: EBAY) as well, so parts can be bought and sold there.

"At our core, we're a technology company and we're always investing in new innovation," Salfity said.

This love of innovation is necessary in an industry being forced to change along with the auto industry. As old models fade away and new models like hybrids come on the market, Audatex is adapting right alongside. Audatex also reports to insurance carriers when it notices certain models having similar problems again and again, which can lead to recalls like what is happening with Toyota right now.

"We share that information regularly with our customers, because if you think about it, we are the aggregators of data," he said. "We see the millions of transactions across the different carriers, so if we see one type of a vehicle being damaged more across all the different insurance carriers, that might be a red flag."

The company has also developed 3-D imaging software that lets mechanics view car parts on a computer and see potential damage without looking at the car. This makes it easier to explain to customers, and easier for the mechanic to see the problem.

Audatex North America has about 700 employees, most of whom work in San Diego. Most of the software is developed in-house.

Though his title is managing director, Salfity has responsibilities similar to a company president. A subsidiary of the software company Solera (NYSE: SLH), Audatex operates in 50 countries, but each branch is relatively antonymous.

Salfity did not take the typical path to the executive's chair. Born in Israel, his family immigrated to the United States when he was young, ultimately settling in Los Angeles. A self-described jock in high school, Salfity cared more about football and wrestling than homework. He said he'd always liked math, because it came to him so easily he didn't have to bring his books home.

A guidance counselor was shocked by his high math SAT score, and suggested he apply to good schools. He was accepted into some impressive programs, but with four brothers, his family couldn't afford it. He went to junior college, and from there transferred to California State University at Long Beach. It took him about 10 years to finally get his degree. In the meantime, he worked full time, and even got his first patent before he had a bachelor's degree.

Salfity went to Xerox from a small company he helped found, which developed bottle inspection software.

He said his unique background might give him a leg up. The insurance industry and companies connected to it are very tight knit, Salfity said, with employees generally only moving around in within the industry. He said his fresh eyes should help him see and tackle problems from a different perspective.

"A lot of people don't try the same thing if they failed it, even though times change and maybe this time it would work. I don't have the sort of bias and the reservation," he said. "I look at it with such a different filter than a lot of people do."