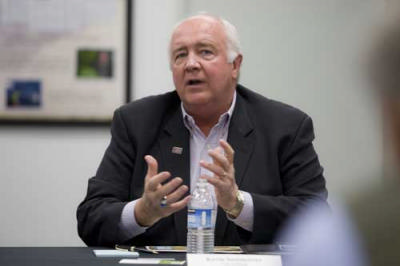 California’s regulatory environment is less than ideal for manufacturing companies, however the region is becoming more attractive to certain types of companies, industry experts said Feb. 25 during a Daily Transcript Executive Roundtable.

The region is also a hub for desalination companies. SPX Global, a manufacturer of solar-powered desalination systems, chose to establish its headquarters in the region to be near all the membrane producers, said Cory Cunningham, president and chief operating officer.

Other companies, such as sign manufacturer Federal Heath Sign Co. LLC are drawn to the region for its large population, said President and CEO Kevin Stotmeister.

“We’re here because usually signs tend to go where there is a lot of population,” Stotmeister said.

However, in order to become more attractive to manufacturing businesses, California must follow the lead of states like Michigan that are investing in creating jobs.

The roundtable was sponsored by Strategic Development Worldwide.

Many manufacturing businesses in the region suffered last year. Taylor Guitars saw its sales drop 20 percent, said Chief Financial Officer Barbara Wight. The company’s 500 employees, most of which are located in El Cajon, took shorter workweeks last year and received unemployment during the time they were not working, Wight said.

While many companies outsource their manufacturing operations to China, Middle Eastern countries prefer products made in the United States or Japan because the quality is better, Cunningham said.

“A lot of the Chinese companies don’t necessarily play by the same ground rules,” Blumberg said. “They’re equally cheap labor costs but they also substitute components that aren’t necessarily on the approved list.”

SPX Global avoids doing business with companies outside the region because the company must rapidly make changes to the products, Cunningham said.

For some high-tech companies, doing business overseas is not possible because the technology will be knocked off, Butler said.

“There’s no way we’re going to work with any firm outside of the U.S. because the Chinese don’t honor our patent system,” Butler said.

Many companies must aggressively defend their patents in order to keep their product line profitable. Taylor Guitars aggressively pursues companies that copy their guitar designs. The industry collaborates to shut down such operations through the National Association of Music Merchants, Wight said.

Technology companies keep a lookout for companies that order just a single system because such customers often reverse engineer the technology to develop a competing product, Butler said. Recently the Middle East has become a hot bed for such activity.

“The minute you show them something, they’ve got money and talent; it’s not just China,” Butler said.

Federal Heath Signs finds its intellectual property is most often infringed upon by potential customers. The company will design a sign, only to have the customer take it to another company and ask for their price to manufacture it, Stotmeister said.

“Those designs are stolen all the time, but unfortunately it’s usually by our prospective customer,” Stotmeister said.

The company cannot be very aggressive in pursuing such cases, but has begun putting a fee on design work for repeat offenders so that they must pay if they steal a logo, Stotmeister said.

In addition to helping protect intellectual property, manufacturing in the United States is becoming more attractive to companies due to falling labor costs and the increased availability of skilled workers, Cunningham said.

“It’s easy to find qualified American workers and they work hard and they want to do a good job,” Butler said.

However, manufacturing credits established by the Obama administration have done little to encourage most businesses to set up shop in the United States, Butler said.

Butler chose not to apply for renewable energy manufacturing tax credits because he does not have an accountant to track the way all the company’s money is spent, he said. He also believes government incentives lead to unsustainable business models, he said.

Keeping up with changing environmental regulations has also become a major issue for many manufacturers. Gibson Guitars was recently rated for an environmental offense for improperly importing wood, Wight said.

“Even though you’re trying to do it right, the law is being developed as we speak,” Wight said.

Send your comments to Monica.Unhold@sddt.com