Market for green remodeling still small, but interest on the rise

Though the market for tenant improvements had plummeted along with the economy, interest in green improvement projects has increased, said Eric Scheidlinger, manager of efficient sustainable practices for Reno Contracting.

Still, that interest has yet to translate into an increase in retrofit projects. Since adding an energy consulting division last year, Reno has not completed any such projects, although several are in the pipeline, Scheidlinger said.

Such projects will be driven by Assembly Bill 1103, which requires building owners provide prospective tenants with a property’s energy consumption data.

Though it will have a major impact on the industry, many owners remain unaware of the legislation, Scheidlinger said. 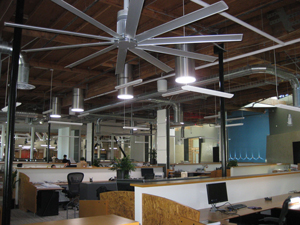 “I have a sinking feeling that until business deals go south because of this, we won’t see a whole lot of projects,” Scheidlinger said.

While Reno has not completed any retrofit projects, it is working on several, including a tenant improvement project being constructed to achieve Gold certification under the Leadership in Energy and Environmental Design (LEED) for Commercial Interiors rating system, administered by the U.S. Green Building Council, Schiedlinger said.

DPR Construction Inc. has had a similar experience with the market for commercial retrofits.

While retrofit projects are few and far between, there has been a spike in interest in green building across all market sectors, Pannier said. Owners are interested in attaining LEED certification because it increases value.

DPR recently completed a full-scale retrofit project on an older office building to serve as the company’s new headquarters.

The offices of Architects Hanna Gabriel Wells in Ocean Beach became the first net zero office building in the region last year. Net zero buildings produce as much energy as they require, consuming no additional power from the grid.

Located on Shoreham Place less than a quarter mile from DPR’s previous location, the single-story office building incorporates passive cooling, with an innovative solar chimney system. Air enters the building through windows on the north side and exits on the south side through a vent in the 17-foot high ceiling. Every third window is operable and doors roll up, allowing increased airflow, Pannier said.

In addition to fresh air, employees enjoy natural light through solar tubes that collect and magnify the sun. Thirty-six solar tubes supply 100 percent of the building’s lighting needs through the use of screens reminiscent of sails that diffuse light.

The interior incorporates a variety of recycled and sustainable materials. Wood palates, commonly used to transport construction materials, are visibly incorporated in the base of walls, doorways and exterior rectangular arches. Such structures also include recycled steel plates used to cover open trenches during road construction. In addition to reducing construction waste, the materials helped create a beach boardwalk theme.

Floors are covered with stained concrete and 100 percent recyclable carpeting with a “completely random pattern” that follows the “biomimicry” principle -- emulating the non-repeating patterns found in nature.

DPR’s use of such materials reflects growing interest in “finding ways to recycle, reuse, repurpose and break the cradle to grave cycle (of materials),” Pannier said.

“It was a test to see how these products held up and whether they’re worth using,” Bellew said.

The San Diego project is not Sundt’s first foray into green building. The company recently completed construction of its LEED Gold-rated headquarters facility in Tempe, Ariz.

While legislation such as AB 1103 will certainly spur demand for such green facilities, ultimately the push will be driven by the benefits, such as improved indoor air quality and fewer employee sick days.

“It’s a better environment for employees to work in,” Bellow said.