Not everyone would see trash service as something that could be the arbiter of building a sustainable future, but Waste Management General Manager Jason Rose said he and his local team of more than 200 employees want to do just that.

Rose started working for Waste Management, a national waste and environmental services company, in 1995 as a regional sales manager, and climbed his way up to his current position in 2004.

Since then, he has helped usher in tools that most San Diegans don’t think twice about, but have been notable in the business world.

“We’ve seen an uptick in people asking for our recycling services,” said Rose about what customers have wanted since the beginning of the economic downturn.

The thought that businesses would want to go green in the wake of a recession might seem counterintuitive to some people, but not to Rose.

“I think people see it as a competitive advantage. I think to compete in this day and age, you have to be green and sustainable,” he said. 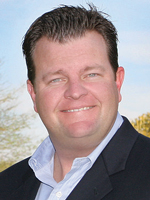 Some of the tools Waste Management has employed include solar-powered trash compactors that reduce the need for collection by 80 percent, Greenops recycling machines that use social networks to reward users through a point system, and a facility that takes trash and converts it to natural gas.

Currently, Waste Management is trying to create a facility that will allow customers to purchase gas straight from its site.

The company’s green efforts carry over to construction waste as well.

Despite construction spending and activity throughout the county being down during the past couple years, Waste Management has increased its recycling services for the construction industry.

One of its facilities located in Santee handles much of the construction and demolition (C and D) recycling from the cities of El Cajon, Santee and San Diego.

Additionally, Waste Management is starting a new program using “Bagsters.” The three-cubic-yard bag can hold up to 3,300 pounds and consumers do not have to sort what types of material go into it.

Customers purchase the Bagsters then schedule a time for Waste Management to pick them up.

Rose said contractors have embraced the system since they can throw in everything -- even the kitchen sink.

While the program is relatively new to San Diego, Waste Management in Minneapolis reported more than 9,000 Bagsters have been sold so far.

The company is planning a major national campaign push later this month when Bagsters will be sold at retailers like Home Depot and Lowe’s.

San Diego County’s Waste Management team is particularly excited about the ad campaign since it will feature one of its drivers.

Rose said despite all of the company’s green efforts, it is most proud about its employees.

The average San Diego Waste Management employee has worked for the company for 15 years.

And it starts from the top.

Waste management president and chief operating officer Larry O’Donnell was featured as the first CEO to get down and dirty with CBS’s new series: “Undercover Boss.”

While Rose hasn’t gone to the same extreme with local employees, he said the show gave management insight as to what employees have to deal with day to day.

He said it reinforced the company ideal that its people come first.

“How you treat your employees will be reflected in how they treat your customers,” he said. “We’re a big believer in that philosophy, and that’s really helped our employee engagement efforts.”

He added that Waste Management has a goal of being listed in Fortune 100’s Best Places to Work.