By THOR KAMBAN BIBERMAN, The Daily Transcript
Tuesday, May 11, 2010 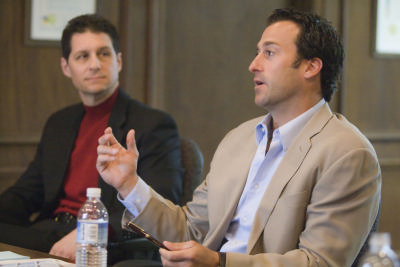 These may not be the easiest times to develop, but opportunities may abound in even the most difficult periods.

Developing during challenging times was a key topic during a recent roundtable discussion at the Daily Transcript offices.

Jeff Daley, president of JR. Daley Construction Inc., said he is concerned with what’s happening to material costs. He has been watching lumber particularly closely. While the price of lumber dropped by 30 percent or more during the past couple of years, Daley said at least 10 percent of that has been made up in recent weeks. With few homes being built, the price of the wood has had to rise to compensate.

The higher material costs aren't likely to stop with lumber. Tony Piscitello, vice president of B&G Consultants, said steel, which he said is currently about $1,100 a ton, is expected to be boosted by $90 as early as this summer due to Chinese demand.

"And we aren't seeing labor prices going down," Piscitello said.

Piscitello has been a construction manager on projects ranging from the Ivy Hotel in downtown San Diego to a community clinic in Vista.

With material prices climbing, and builders working on as little as 1 percent margins -- if they are even able to make a profit -- how is it possible for developers and general contractors to survive?

Segal, who has designed and built more than 300 residences in downtown San Diego and was instrumental in the rebirth of Little Italy, said his secret has been to develop smaller projects that "fly underneath the radar." By making them well within the maximum density, the often contentious public hearing process may be avoided, Segal said.

"If you have a site where you could probably get 40 units, it will go a lot faster if you only build 19," he said.

That project, which also has a retail component, is at India and Winder streets in the Mission Hills area.

Different parts of the city have different thresholds for community review. In Mission Hills it is a mere two units.

In the city of Del Mar, developers are required to place so-called story poles to show the surrounding community the height, width and depth of a project.

Greg Shannon, Sedona Pacific Corp. president, said this is akin to begging to have your project killed.

Shannon, who handled development services for the One America Plaza office building and the Ballpark District surrounding what is now Petco Park, agreed with Segal that small to medium-sized projects are generally the answer in this economy.

He also realizes there are no guarantees, even if a project has been touted as a smart growth model.

For more than seven years Shannon worked to develop the Cedros Crossing project adjacent to the Solana Beach train station. The project was to include 141 multifamily units and 50,000 square feet of office and retail, but Shannon was never able to convince area residents and city officials that the project was a good fit.

"A 141-unit development isn't a huge project, but it was large enough to be killed," Shannon said.

Segal, who had high praise for the Centre City Development Corp., said unlike Shannon's experience in Solana Beach, his recent dealings with the city of San Diego have been very positive. He said CCDC and the city are much more accommodating today than they were in the past.

All at the table acknowledged that those who process project documents in San Diego are stretched thin as staffing has been cut to the bone.

Shannon said even when the city was fully staffed the processing took a long time.

"Nothing moves that fast in San Diego," he said.

Shannon added that while most local governments "are good at telling people what they want, the biggest problem is you could miss an entire cycle while you're waiting."

"It takes three years to do an EIR," Shannon said.

Sudberry is happy to have approvals behind him for the Quarry Falls project being planned on the northern edge of Mission Valley. That development ultimately calls for as many as 4,780 units, and 900,000 square feet of retail, office and museum space.

Although processing might not be ideal, Sudberry is encouraged to see both the housing and the commercial markets starting to show some life.

"I have seen some very encouraging trends. We have an apartment property in Mission Valley that is doing well and there still a good demand for infill retail," he said.

While Segal, the architect, said fewer demands are being made on him these days, both Shannon and Daley said a great deal is still being demanded of developers.

Daley's firm, whose San Diego roots date back generations, also has a wide range of projects, from the conversion of an old La Jolla restaurant property into the La Jolla Fitness Together health club, to the major renovation of an Olivenhain home for actor Richard Dreyfuss.

Even in a downturn, numerous opportunities are available for commercial and residential developers in San Diego County. Daley said fractured condominiums that haven't been completed are one option. Segal said aging retail centers that may be redeveloped into housing are another.

It's not the right time for every project. After a couple of years of a down economy, Daley said he is still waiting for the right time to pull the trigger on a small subdivision with 1 1/2-acre lots in Fallbrook.