The company received an award from NAVFAC for 100,000 hours of safe performance during the construction of the $64 million Weapons and Armament Technology Center at the Naval Air Weapons Station (NAWS) in China Lake, Calif.

Cmdr. Stan Kloss of NAVFAC said this achievement “is equivalent to one person working on one job for more than 60 years without a single safety mishap.”

NAVFAC’s Lt. Cmdr. Ben Miller added, “Barnhart Balfour Beatty’s team of dedicated personnel have reported to work every day fully embracing the strong safety values of NAVFAC and NAWS China Lake.” He presented the company with a certificate of achievement and a NAVFAC safety coin. The safety coin is a special award that recognizes outstanding, safety-conscience contractors who excel during project execution and achieve high marks in safety audits.

The company also received a STAR program award from the U.S. Navy for performance during the construction of the $24 million Wounded Warrior Barracks at Marine Corps Base Camp Pendleton. For more than a year, hundreds of skilled construction workers logged more than 87,000 labor hours on the project without a recordable or lost-time accident.

In presenting the STAR award, Lt. Cmdr. S.R. King, resident officer in charge of construction, said, “As we strive to deliver a quality product, on time and within budget, we must not lose sight of safety as our No. 1 priority. Your company has shown that commitment and has met our high standards for job safety.”

This ambitious program was adapted to site-specific safety and health policies for construction of the Weapons and Armament Technology Center and the Wounded Warrior Barracks that would guarantee a high level of safety performance among company employees, subsidiaries and clients.

“In order for the Zero Harm goals to be realized, we created a level of awareness that is top to bottom in the organization and includes every employee in the company and every subcontractor,” said Eric Stenman, president of Barnhart Balfour Beatty. “We are extremely pleased that everyone involved in these projects has reacted so positively to the Zero Harm philosophy and achieved these important milestones for the benefit of our employees and our clients.” 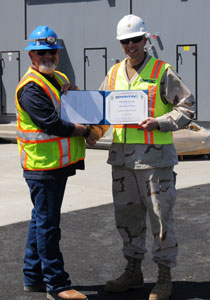