By JEN LEBRON KUHNEY, The Daily Transcript
Tuesday, May 18, 2010 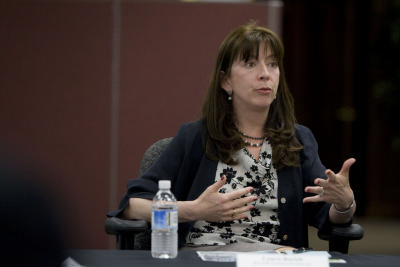 The word "insourcing" was hardly uttered before an hour-long conversation broke out between a little more than a dozen defense industry stakeholders at The Daily Transcript offices on May 6.

Insourcing has become a heated topic after Congress passed its 2010 spending bill last December with a mandate that the Department of Defense insource more of its "inherently" governmental jobs.

Rear Adm. Mark F. Heinrich, the commander of fleet and industrial supply centers for the U.S. Navy supply corps, was the sole government representative at the table.

"Budget pressures are pretty harsh for our fleet and industrial supply center team. So, we have quite a bit of outsourcing and as our service contracts come to due we are looking at whether it makes sense to continue the contracts or insource them to a much greater extent than we used to," he said.

After working with the Army for five years, Alpha Ten's 10 information technology employees were replaced by 13 government workers.

Dickey said the contract was the bulk of Alpha Ten's work, though he said the company will make up for it.

Heinrich said there is still plenty of work for civilian contractors, even if there may be less work than in the past.

"Bringing in contractors is a critical part of our success," he said. "Your contractors are part of the surge we'll need as we bring our SAP (enterprise resource planning) system online ... Everything ebbs and flows."

The concept of the work force size surging was a point of concern for several of the roundtable participants.

Kenneth Slaght, of General Dynamics (NYSE: GD) and president of NDIA, said he worries that government entities are not looking at the long-term costs of insourcing. He said he knows from his former position at SPAWAR that the government does not factor in retirement costs and benefits for new employees when pricing insourced labor.

"When you bring government people on they're never going away," he said.

With outsourcing, however, during program or budget cuts the government can close out contracts and not refill the positions.

"From an industry perspective, when the government does insourcing, what they're not doing is counting the entire cost of that insourcing -- in other words, having to retain those civil servants on staff through retirement," said Frank F. Hewitt, CEO of IntelliSolutions Inc. "So when they're competing from an insourcing/outsourcing point of view with industry we look for what it costs for all those benefits when we price those benefits into our bids. They're not competing on a fair playing field."

According to the Small Business Administration, just over half of people in the United States work for a small business. Additionally, the SBA reports small businesses created 64 percent of net new jobs over the past 15 years.

"When you get into insourcing and take away from small business, you're hitting the breadbasket," she said.

But Jim Lasswell, president of Indus Technology Inc. and chair of the NDIA small business committee, said he can understand why the government would choose to insource: contractors have not done a great job getting good people for the acquisition side of the equation.

He said many people in the acquisition community are relatively new to the field. Their lack of experience can result in contractors getting one-sided deals with government entities.

"It's not that you have contractors sleazily out there trying steal from the taxpayer, but we have rotten specifications, we're buying the wrong things and we don't have a trained, seasoned group of acquisition professionals to do that well," Lasswell said.

Additionally, a lack of standards for proposal evaluations can result in headaches for contractors and the government, Barish said. Contracts are chosen based on "best value," with no clear definition for what that phrase means.