By JILL ESTERBROOKS, Special to the Daily Transcript
Tuesday, May 18, 2010

Karen Conti couldn’t help but beam when the Navy recently announced that U.S. military women would be allowed to serve aboard submarines starting in 2012.

“Not only are female sailors being assigned to guided and ballistic-missile submarines, but now more than ever before women in greater numbers are pursuing successful defense industry careers,” said Conti, whose first post-college job 31 years ago was working on a submarine project for a large defense contractor.

She is one of the nearly 300 Lockheed Martin employees, plus hundreds of other government staffers and contractors, working at the new 158,000-square-foot “green” facility on a sprawling hilltop campus in Scripps Ranch. 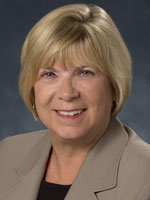 In addition to her senior management responsibilities at Lockheed Martin, Conti recently surfaced as president of the San Diego Chapter of Women in Defense (WID). It is a volunteer leadership role that allows her to “open new hatches” for the growing ranks of women in the traditionally male-dominated industry.

According to Conti, WID is all about networking and professional development opportunities for women (and men) working primarily in national defense and security professions.

“We try to provide an environment where folks can make valuable contacts that enhance their careers and provide learning opportunities geared to helping grow their businesses,” she said.

Part of that educational outreach component includes a mentorship program that matches fledgling members with respected leaders of the defense community that can provide advice, training and new business prospects.

“We’re trying to gather support and push actions through the SBA and other organizations that will result in more procurement set asides for women-owned small businesses,” she said.

Women-owned small businesses are one of the fastest growing segments of our economy, Condi said, “yet they continue to be underrepresented when it comes to federal contracting.”

In addition to social networking and business advocacy efforts, the WID San Diego chapter provides considerable volunteer services to military families and other community-based service organizations that aid members of the Armed Forces.

“There’s a huge need right now in San Diego County, with so many deployed and returning troops,” she said. “Resources for service members and their families are stretched thin.”

Free membership is one perk that all WID chapters offer to military members and civilian employees at area bases.

The local WID group meets monthly and sponsors events ranging from high-profile guest speakers such Michelle Nolen, the Navy’s deputy for SPAWAR who spoke at an April forum about a mentor-protégé program, to social nights like the upcoming June wine tasting and Humane Society pet adoption event to raise funds for its scholarship program.

All are aimed at getting women from various fields to meet, talk and encourage business growth in the defense industry, explained Conti.

The 5-year-old San Diego chapter is one of about a dozen thriving WID organizations active across the nation, from California to Washington, D.C.

Conti, long an active member of various industry-related organizations as well as Lockheed Martin’s mentoring and partnership programs, has pioneered WID chapters in several markets where she’s worked, including most recently Eagan, Minn.

When she moved to San Diego in late 2008, she was thrilled to see the local WID organization more “visible and social” than many of the others around the nation.

The local chapter currently has 190 members -- some of whom are men -- including owners and employees of government contractors big and small, as well as military and civilian personnel.

“We’ve added 50 new members so far this year,” Conti said. “This is a testament to how strong the organization is here locally.”

“The breadth and variety of the different work you can get involved in is one of the best things about a career in defense,” said Conti, noting that engineering and IT jobs are particularly plentiful.

When Conti was growing up, her Navy pilot father moved the family from military base to military base. Twice they were stationed in San Diego County and Castle Park High in Chula Vista was one of 15 different schools Conti attended in as many years.

After graduating with a business degree from a small college in Newport, R.I., Conti had no intention of pursuing a military defense career.

In those days, she said women weren’t even admitted to the Naval Academy, let alone allowed to serve on surface ships or submarines.

“On a lark I responded to a newspaper ad and landed a job working on the Trident submarine project for General Dynamics,” she said. “Three decades later, I’m more excited about the defense industry and challenged by the demanding work than ever before.”

The U.S. Bureau of Labor Statistics estimates a current defense labor force of more than 3 million people, including health care, transport, communications and security as well as management and research and development.

Because military budgets are often decided many years in advance and tend not to fluctuate wildly, much of the industry has been shielded in the past few years from the recent recession.

Conti cautioned, however, that defense budgets are “coming down” and causing new challenges for WID members.

“In the months and years ahead we’ll be looking hard at ways to grow member businesses in a declining budget cycle,” she said.

May 17, 2011 -- Reporter Claire Trageser checks out a demonstration event for the F-35 Lightning II fighter jet, a program for which several San Diego companies supply parts.