The U.S. Small Business Administration is honoring local business owner Jeannette Carrico, president and CEO of The Exit Light Co., with the 2010 Small Business Person of the Year Award. It’s an accolade she happily shares with her employees.

“Everything I do is a company effort,” Carrico said. “My success is determined by the success of the company.”

The Vista company specializes in exit, emergency and energy efficient lighting. It also provides design, engineering, installation, testing and maintenance of indoor and outdoor lighting, as well as high-quality electrical parts for such systems.

Ten years ago while living on the East Coast, Carrico and her husband Paul formed the company in partnership with others. Funded through personal resources and located in San Diego, it struggled for several years. When the partners dropped out in 2003, the Carricos moved to San Diego, determined to make the company succeed. To expand the fledgling company’s revenue base, they added the capability to retrofit commercial buildings to energy efficient lighting, and then they launched the website. Carrico said they’ve seen tremendous, steady growth ever since.

“The continued growth and success of the company shows that there is value in engaging in a business built around the concept of increasing public safety and risk management,” said Carrico, 40. 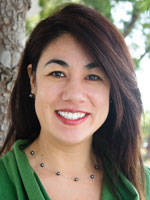 According to Carrico, launching the e-commerce site took the company to a higher level by allowing it to reach a national audience. She said the range of low- to high-end, energy-efficient products -- from technologically complicated hazard emergency lights to basic signs that go above the door -- satisfy a variety of applications and industries. The company is a recent General Services Administration contract holder with a line of Made in the USA products. Carrico said the company plans to expand its line of Made in the USA products and projects 10 percent growth related to GSA contract sales this year.

In addition to its e-commerce business, the company installs and maintains emergency lighting systems for corporations and chains in Arizona and Southern California such as AMC Theaters, Claim Jumper and Solar Turbines.

“We’ve had tremendous growth from where we began. We’ve seen tremendous changes and growth through determination and working long hours,” said Carrico. “As anyone who is an entrepreneur knows, it takes that kind of dedication and focus.”

When the Carricos took over the day-to-day operations in 2003, it was just the two of them and one field service technician. The company now employs 12 at its 10,000-square-foot space in Vista. Carrico’s husband is the company’s chief financial officer. Carrico’s dogs, two smoky gray Yorkiepoos named Cocoa and Hershey, sleep quietly under her desk.

Born in Korea, Carrico moved to the United States when she was 7 and spent her formative years in Carmel Valley. Although she started attending UCSD, she left to pursue an opportunity and never returned to complete her degree.

“That’s something I value: when you seize opportunity, don’t look back,” she said.

Carrico also values honesty and integrity, core principles she said stem from her Jehovah’s Witnesses beliefs, which inform all aspects of her personal and professional life.

“Integrity is important, professionally and personally,” she said. “When I deal with employees or customers, I make sure I’m kind and respectful. All those Bible principles come to mind that help me be a certain way. I treat people the way I’d like to be treated: ethically, fairly and honestly, and I expect and hope that businesses we deal with are the same.”

Carrico manages the day-to-day operations, especially the e-commerce site, the sales and servicing of local clients as well as insurance and human resources issues. She does not take the personal responsibility for her employees’ lives and livelihoods lightly.

“It’s a heavier responsibility when you’re running your own company versus working for a corporation,” she said. “It really is a challenge to make sure you’re making the right decisions that will help the company thrive and allow your employees and customers to benefit as well.”

Carrico acknowledged that being a woman-owned small business in a male-dominated industry was challenging at first. Naysayers doubted the business would survive, but her tenacity and focus on developing business contacts and building relationships over time eventually paid off. The fact that she had no knowledge of the industry going into it wasn’t a negative in her opinion.

“I love to learn on the job and grow, so I don’t let something like that become an obstacle,” she said.

Breaking into a male-dominated industry was one thing. Another was overcoming the perception that a business run by a husband and wife -- with the wife calling the shots -- was destined for bankruptcy court, divorce court or both. But Carrico, who will celebrate her 17th wedding anniversary with Paul in August, holds a contrary point of view.

“We have different strengths and qualities and viewpoints, so we use that to our advantage rather than allowing it to tear us apart,” she said.

In life and in business, Carrico said the respect she and Paul have for each other and their differences help them see problems in a different light and find solutions they might not have found otherwise.

Now that The Exit Light Company is on solid ground, the Carricos can spend time doing something else they love to do: travel. After a recent trip to Turkey, Carrico thinks she’d like to go back, but Egypt, New Zealand and Australia are on the must-see list, too. If past performance is any indication of future results, it’s not a question of whether or not she’ll go back, but when.