Plans under way for national cemetery at Miramar

The morning of Memorial Day will be a busy one at Fort Rosecrans National Cemetery.

Children from groups like the Boy Scouts, Girls Scouts and the Young Marines will place 67,000 American flags at the gravesites of fallen veterans.

There is no way the children will personally know any of those who rest in caskets under the manicured lawns of the cemetery -- the last casket burial to take place there was in 1966.

Soon, however, fallen veterans will have a new place to call their final resting place at the Fort Rosecrans at Miramar National Cemetery.

Kirk Leopard, the director of the Fort Rosecrans cemetery said the soon-to-be construction of the Miramar cemetery is a "major milestone for the San Diego area."

"Right now we have to send (those who want a casket burial) to Riverside, which is nearly two hours away," he said. "I wouldn't want my mother to have to drive two hours to go to my father's gravesite and I know the veterans here don't want to be in that situation either." 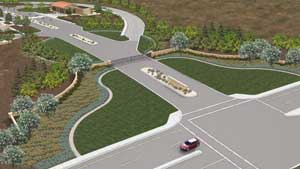 A rendering of the Fort Rosecrans at Miramar National Cemetery entry gate.

There is still some place for veterans' cremated remains at Fort Rosecrans, but that space is filling up quickly as wars continue on and veterans from World War II, the Korean War and the Vietnam War age.

The Miramar cemetery is scheduled to conduct its first burials in September, though the completion date for the entire site isn't until February 2012.

The official groundbreaking occurred in January, but a contract has not been awarded to a general contractor yet.

There will be 168 acres of developed space on the 323 acres of land set aside for the cemetery.

The Miramar site is unique in that the Department of Veterans Affairs does not own the land.

Rather, the VA has a land use agreement with the Department of the Navy to use the land.

The master plan is designed to have the cemetery last for the next 60 years.

It took more than a decade to get construction under way for the cemetery.

Planning began in 1999, but environmental issues hampered the project for six years.

The land on which the cemetery is located is inhabited by endangered gnatcatchers and threatened fairy shrimp. 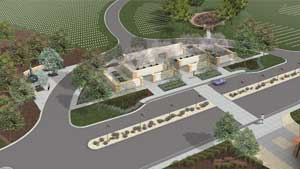 The VA was able to purchase 39 acres of land in East County for the gnatcatcher habitat, but the master plan for the cemetery called for it to incorporate vernal pools -- areas that fill with rainwater and are home to the fairy shrimp.

Unlike most national cemeteries where burial plots are in neat rows sprawling the length of the land, burial grounds will be in clusters with native plant life and vernal pools in between.

"It's going to have a really nice effect," said Leopard.

One of the larger vernal pools will be part of a "memorial walk" toward the entrance of the cemetery.

The walk will also include statues and memorials donated by various veteran groups, and have placards describing some of the native species.

Additionally, the cemetery will have an amphitheater that can accommodate 15,000 people -- something crucial considering about 5,000 people usually attend the Fort Rosecrans Memorial Day service, Leopard said.

This year's service will have participants ranging from U.S. senators to family members of those killed in Iraq and Afghanistan, Pearl Harbor survivors to commanding officers of some of the local bases.