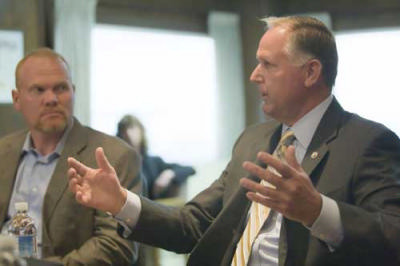 Adapting to a changing market seems to be the key to surviving in the current economy, local construction firm leaders concluded during a recent Daily Transcript executive roundtable discussion.

General contractors, subcontractors and architects are breaking into new sectors they may not have considered entering before and are forging design-build partnerships to keep their backlog healthy and their businesses afloat.

Collins added that the only projects he is really seeing on the private side are tenant improvement jobs.

"We are definitely seeing that," said Michael Wall, owner of Michael Wall Engineering Inc. "Diversity has been really good for us. We kind of entered into this phase being fairly well diversified, but firms that weren't well diversified didn't have the opportunity to gear up and get that project experience to move into military (work)."

Wall also said that a changing dynamic is they way firms partner up with general contractors, architects and subcontractors. He said it seems the industry is moving away from looking at friendships and more toward experience when building a team, especially with military and other government related projects.

Jody Watkins, owner of Watkins Landmark Construction, said land development is coming back into the market and is an area where his company has had to shift its focus again.

"We're starting to see life in that again," said Watkins, who's five-year company preps land and subdivisions for custom homes that cost more than $2 million. "We are starting to see this for (developers and land owners). I think the belief is money will always gravitate toward San Diego (because) people want to live here." Lending practices to fund projects also have changed.

Tim Schultz, principal at Pacific Cornerstone Architects said that since a lot of the small local banks have gone under or cannot lend money, his 17-year-old firm has had to look for work outside of San Diego.

He cited a project in New Mexico that Pacific Cornerstone Architects is working on that involves designing a 500,000-square-foot laboratory facility for the Department of Energy and the National Nuclear Security Administration.

"It had been held up by the (Barack) Obama administration ... all built with private money," said Schultz.

Wayne Hickey, CEO of Roel Construction, said it's difficult to predict what market is going to carry his company and the local industry for the long term because the current economy is constantly changing.

"It's no longer business as usual," he said. "I'm not sure what it's going to be ... It seems like every week is changing on how we are going to need to adapt to this marketplace and adjust our business and what kind of work is out there. It's been challenging. And certainly the people that are paying attention to that are willing to change and willing to understand that what we did in the past may not necessarily be the model ... you just need to be able to understand the best you can and be able to adjust quickly."

Tom Brown, president and CEO of Sierra Pacific West, said he is seeing more and more contractors from outside San Diego bidding on local projects, adding that it is a growing concern because it drives down cost and profit margins.

"I think it would be nice if there was some way that we could have some sort of unwritten rule or regulation in the city that says, 'Look, you need to maintain a certain percentage of local participation whether that be on the general contractors side or the subcontractors and vendors side.'"

Contractors also are finding themselves adapting to new technology, such as Building Information Modeling (BIM), which architects, engineers, general contractors and subcontractors are using more and more.

Clark Thompson, president of Neal Electric -- which sponsored the roundtable discussion, said his company has fully embraced BIM. The software allows his company to locate potential conflicts in HVAC, plumbing, electrical and all the other facets that are behind concrete walls and in the steel frames.

One obstacle to implementing BIM is the increased cost. John Luft, business development manager of Neal Electric said keeping a project within budget is already a challenge because bids are coming in so low.