If you have dropped off a friend or a loved one, or yourself have traveled from Lindbergh Field in the past several months, you may have noticed the beginning of a transformation.

That’s because the San Diego International Airport is in the middle of a $1 billion expansion of its second terminal.

During the next three years there will be various detours and closures in and around Terminal 2 due to the work.

A month ago, the project swung into full construction mode as the first of two pedestrian bridges was knocked down. Entrance into Terminal 2 was detoured and parking lots were closed for about 21 hours.

The second pedestrian bridge at Terminal 2 is also slated to come down in the coming months.

Removal of the bridges is necessary for construction of a dual-level roadway in front of Terminal 2 West. 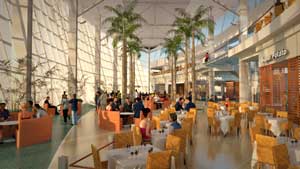 The project got started last summer when prep work like apron improvements and the addition of temporary aircraft parking took place.

Earth movers in and around Terminal 2 currently are transferring dirt out, so that a 1,380-space temporary parking structure can be built just west of Terminal 2. Shuttles will transport passengers from the temporary structure, since the current parking lot in the second terminal has been closed to accommodate the construction process.

The USO Center at Lindbergh Field has relocated to a temporary home. The existing building is being prepped to be demolished so that a new 10,000-square-foot facility, which will be the largest airport USO Center in the nation, can be built.

The temporary location offers active and retired military and their families all of the amenities provided at the original facility, including a game room, lounge, baggage area, showers and a children's play room.

Katie Jones, spokeswoman for the San Diego County Regional Airport Authority, said that because of the e-mail alerts and the airport website’s constant updates on the project, the airport authority has received few complaints about the project, its detours and closures. 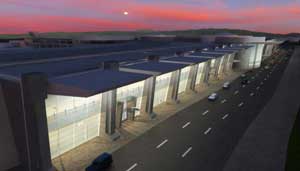 "The Green Build has moved very smoothly so far," she said, adding that airport visitors should allow extra time as it may take longer than usual to arrive, park, get to the terminal, check in and/or pick up passengers at the airport as a result of the Terminal 2 expansion.

Once construction starts inside Terminal 2 -- to add new ticket counters, security stations, retail space and other airport amenities -- Lindbergh Field visitors will be sheltered from the work.

"While construction is going on inside Terminal 2 there will be a wall that separates that area so that passengers are not affected," Jones said.

The Terminal 2 expansion is also being built with sustainable materials and amenities, and is designed to achieve LEED silver certification by the U.S. Green Building Council.

Funding for the project is made possible through user fees, airport revenue bonds, airport cash and Federal Aviation Administration grants.

The expansion of Terminal 2 is still tentatively scheduled to be completed in the first half of 2013. Once completed, Terminal 2 will increase from 300,000 to 700,000 square feet and the entire airport will have 51 total gates.

More than 18 million passengers travel through Lindbergh Field and, according to the airport authority, this number is projected to increase to approximately 30 million by 2030.

"To meet the demand of the region, we need to expand," said Bryan Enarson, vice president of development for the San Diego County Regional Airport Authority.