Giving back to the community, being a forward thinker and maintaining a strong faith has helped George Weir be successful in his businesses and his life.

His company, George W. Weir Asphalt Construction Inc., started fixing potholes for free in the city of Escondido this past February after the season's winter storms left a vast amount of damage to city streets. 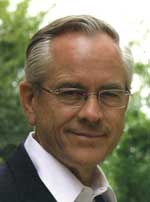 "The city is going through a financial crisis this fiscal year, where it is going through an approximately $10 million budget deficit," said Weir, who oversees the asphalt company along with sand and gravel, trucking and oil spread companies that serve the commercial and residential markets.

"Sometimes you have to give back to get back," he said. "We are all in this together. We can't expect bailouts. As a community, we need to help one another out."

Weir grew up in Escondido and his companies are headquartered there. He was born at Palomar Hospital and attended schools in the city. He earned his degree from San Diego State University in 1979.

He started his company after he bought his dad's old green pickup truck and began driving it around with asphalt -- which he bought from a local plant. He would find holes in parking lots and driveways and persuade owners to him fix them for $20.

"As long as you do quality work for a fair price you can expand," he said. His company now has about 70 industrial trailers to haul the asphalt.

Weir brought his brother on to work with him after his brother received his master's degree from San Diego State. Together they started a full contracting asphalt company.

After 20 years of George W. Weir Asphalt Construction, the company was able to migrate into the oil dispersal arena, and the entity Pacific Oil Spreading was created.

In 2000, Weir noticed that most of the quarries in the county were closing and realized there was going to be a shortage of aggregate, which is used to make the compound that patches up street holes.

Weir said he saw this as a problem, but also as a new opportunity.

"We saw the possibility of recycling," he said. "The state, Caltrans and the county were starting to (see) the benefits of recycling and reusing asphalt and concrete."

Used asphalt and concrete can be crushed to make "a quality road base," he said. Weir created a third company, Escondido Sand and Gravel, that his brother also helps run. There are five locations (Otay Mesa, Miramar, Oceanside, Escondido and the central valley) that make and sell this Class 2 Base material to help patch holes.

Three years ago, Weir noticed again that there was going to be a void in the industry.

The last asphalt-only plant in the North County was going to be closing down since it was situated near California State University, San Marcos and it had previously been stated that once the campus was fully built, the asphalt plant would need to come down.

"When I got into the business in 1979 there were seven asphalt plants that served ... North County," he said. "It's kind of amazing, because if you follow the demographics, we have certainly grown since 1979 here in the North County ... so one would think that there would be more asphalt plants, rather than fewer ... "

Because of this, Weir was able to talk the city of Escondido into zoning a property on Tulip Street so that a new asphalt plant could be built.

"Dating back to the 1950s, it had an asphalt plant on it," Weir said about the property. "They were a supplier at that time but they closed, so we proposed to bring the plant back after we bought the property ... and the city said 'yes.'"

Weir decided to make it a small plant since he did not want to affect traffic in Escondido with a vast amount of trucks that would be needed to serve outside the North County.

"We recognize the needs here in Escondido," he said. "This is were I was born and raised and raised a family and worship here. Our kids go to school here."

Weir believes his faith and paying it forward has led to his success. He has had the same banker for about 35 years, who has helped him get loans to expand his asphalt empire. Almost 80 people are now employed at all his companies.