Ask Joe Werner, CEO of Intergulf Development Group, how business is going, and he'll laugh in your face -- in a good-natured way, of course.

As the leader of Intergulf's Western operations, Werner recently found himself at the center of the economic maelstrom. The Canadian real estate development firm's primary market in the region was luxury condos, one of the hardest hit segments of the housing market.

In the past two years, the company has been reduced less than a quarter of its previous size. Intergulf's ranks shrank from 45 permanent employees in 2008, to the present 10, Werner said.

However, the outlook for Intergulf is beginning to improve, evidenced by sales at the company's Breeza property, located at Ash Street and Pacific Highway in Little Italy.

The property was recently approved for the Federal Housing Administration program, and buyers are now able to put 3.5 percent down, Werner said.

To encourage buyers, the developer has also discounted prices as much as 35 percent. Discounts are currently hovering 24 percent off the original price, Werner said. 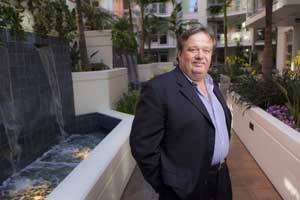 It is an encouraging sign for Intergulf, which is now focused on recouping the costs rather than making a profit on the development, Werner said.

"Now it's not a question of how much profit do we get, but how much of our equity do we get back?" Werner said.

The company may choose to retain a portion of the units for two years, when prices are expected to begin to recover.

An industry veteran, Werner has seen it all before. Housing prices have inflated and plummeted in a cyclical fashion five times during his lifetime, he said.

Two years from now, properties will begin to appreciate and several years later, "the craziness will start all over again", Werner said.

"In the end, residential real estate is housing," Werner said. "It's not an investment."

The company has plans to build a 216-unit tower on property in Long Beach, Calif. Intergulf had originally planned to build the units at $650 per square foot but after revising plans, realized the project could be built at $450 per square foot. However, the builder's projections indicate finding buyers will be a struggle at a price of more than $400 per square foot.

Intergulf plans to hold onto the Long Beach property until building on it becomes profitable.

With little activity in the residential market, the company is launching a new service to assist financial institutions and investors with troubled properties. The company has the infrastructure to provide comprehensive services, including re-entitlements, Werner said.

When banks take over properties, they often hire several consultants to meet their needs. Intergulf will provide all the necessary services in one place. The company will retain its focus on multi-family residential and commercial properties with the service.

"We are trying to take the company from a traditional role to a new market," Werner said.

The company is considering entering the rental housing market, which Werner sees as a potential bright spot.

Such expansions are part of the company's strategy to stay afloat until the residential housing market recovers. At the moment, construction lenders will not issue loans for condominium projects.

Permits are still expensive to procure, averaging $25,000 per unit in downtown San Diego. The high price of permits and the design demands of the city make it difficult to build lower-cost housing, Werner said.

Intergulf had planned to build a price sensitive project at 16th Street and Broadway in downtown San Diego, but after the Centre City Development Corp. intervened, the project was no longer affordable. The agency required the developer to include granite panels on the exterior of the building, Werner said.

"I think cities generally need to get a little bit more realistic of what they're demanding from the developer," Werner said. "The design guidelines they impose make it impossible."