By BARBARA METZ, Special to the Daily Transcript
Thursday, June 24, 2010

Lennar is unveiling models for its first all-solar neighborhood in San Diego County at Terraza in San Elijo Hills this weekend.

The neighborhood of two-story homes priced from the mid $500,000s will include Lennar's PowerSmart package, which includes a SunPower solar system and a variety of other energy-saving and resource-conservation features.

"San Elijo Hills was the perfect community for us to introduce an all-solar neighborhood because it is such an ecologically sensitive community, with 18 miles of hiking/biking trails, horse trails and 1,100 acres of open space," said Marianne Brown, vice president of sales and marketing for Lennar (NYSE: LEN). "Harnessing the power of the sun to save resources was the next logical step."

Each of the 64 homes at Terraza is equipped with a site-specific solar system that has been selected in response to the home's estimated energy consumption, roof location and climate. The systems, which range in size from 2.25 kw to 5.4 kw, can be purchased and included in the mortgage or leased. Currently, a federal tax credit of 30 percent of the purchase price is offered.

SunPower (Nasdaq: SPRWA) is the global leader in high-efficiency solar solutions for homes, businesses, commercial buildings and utilities. The company, which has more than 550 megawatts of solar system installed or under contract, built the world's first solar powered aircraft for NASA in the early 1990s and is developing the world's largest -- 250 MW -- photovoltaic (PV) power plant, set to begin energy delivery this year. 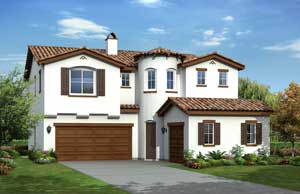 Lennar will unveil the model homes at its new neighborhood of energy-efficient homes at Terraza in San Elijo Hills on June 26. Terraza offers three floor plans, ranging from 2,182 to 2,721 square feet, with three to five bedrooms. Homes are priced from the mid $500,000s.

"Terraza's solar package, which generates energy directly from the sun -- with no fuel, no noise and no emissions -- delivers a variety of benefits to homeowners as they save money and protect the environment," said Browne. "In the long run, solar systems protect homeowners from rising energy costs, reduce their carbon footprint and help the United States gain energy independence."

OnGrid Solar, an industry research firm, estimates that the pretax compound rate of return on a typical home solar system (in a state such as California) will be better than 15 percent per year.

Browne added that homeowners will be able to monitor the amount of electricity they are generating on a LCD display in their home, via the Internet and through mobile device applications.

While there was major emphasis on energy-saving features, the company has placed equal prominence on architectural design and luxury features.

The social hub of the community is a walkable towncenter with a classic town square, visitor center, two schools (an elementary and middle school), four urban-style townhome neighborhoods, neighborhood shopping and a 19-acre park and community center. The community is also the site of the 250-acre Double Peak Park, which offers majestic views of the Pacific coastline and San Diego County's backcountry.

San Elijo Hills has been honored with the most prestigious community design awards in the building industry, including a Gold Nugget Grand Award for its towncenter and a Nationals' Gold Award in the "Master-Planned Community of the Year" category at the National Association of Home Builder's convention.