The mixed-use Plaza Lindo Paseo is one of the largest privately funded projects in San Diego, providing student housing and retail steps from the San Diego State University campus.

Completion is expected for the fall semester of 2011.

The developers were required by the city to make several improvements for the project to move forward, including the installation of new street lights, city contributory water-main upgrade and improvements to existing sidewalk accessibility. 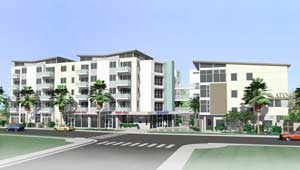 A rendering of Plaza Lindo Paseo