Even in down market, South Bay moves forward with improvement projects 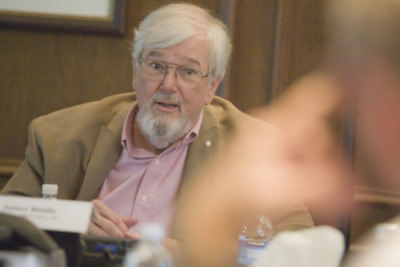 The South Bay may have suffered numerous disappointments as a result of the recession and other events, but some of its top leaders are decidedly upbeat about its future.

The state of the South Bay's development was the topic during a recent roundtable discussion at The Daily Transcript offices.

Optimism hasn't always been easy. The city of Chula Vista had expected a 1,800-2,000-room Gaylord Hotel with 200,000 square feet of exhibit and meeting space to be under way by now, but the Tennessee-based operator pulled out after it was unable to reach an agreement with union workers who would have helped run the asset.

"A major hotel and convention center would be a benefit to every community in the South Bay," said Jess Van Deventer, a National City councilman and former port commissioner.

Chula Vista Mayor Cheryl Cox, who said she is very optimistic about the bay front's future, also believes a roughly 1,500-room resort hotel with a convention component should prove viable when hotel financing returns to normal.

"Things are looking up for the bay front and the rest of Chula Vista," Cox said.

The resort is just one part of a multifaceted plan that also calls for about 1,500 residential units and a retail component. Master developer Pacifica Holdings is swapping some of the property with the Port of San Diego because residential properties aren't allowed on port tidelands.

The swap trades 97 acres held by a Pacifica Holdings-controlled partnership near the Sweetwater National Wildlife Refuge and the Chula Vista Nature Center for 35 acres near the Chula Vista Harbor.

While Cox has been frustrated by her city's inability to get rid of the Duke Energy (NYSE: DUK) power plant, she believes it could be dismantled as early as 2012 -- noting that what is widely viewed as an eyesore is rapidly becoming superfluous anyway.

Further inland, the U.S. Olympic Training Center is being readied for six new beach volleyball courts. This has been a successful training venue for athletes who have gone on to win multiple gold medals.

Nearby Southwestern College is undergoing what is destined to be the largest expansion since the school opened in 1961.

The $55 million development is to include a college center with classrooms, a new bookstore and community space.

"We are looking at a whole lot of new programs," said Raj Chopra, Southwestern College superintendent/president. "We're developing our biotechnology ... green technology ... We're very pleased to be where we are."

McMillin Cos., which has continued to build in the South Bay albeit at a slower pace, is gearing up for the development of the Millenia project -- formerly known as the Eastern Urban Center -- within the Otay Ranch master plan. Millenia calls for 3,000 residential units, and as much as 3.5 million square feet of office, retail, civic and hospitality uses.

Also within Otay Ranch, Cox said she remains hopeful that an already identified 340-acre site will become the location of a new four-year university that could eventually become part of the University California system.

Transportation continues to improve in the South Bay. The South Bay Expressway, which extends from Otay Mesa into Spring Valley, has provided better access between the border and eastern Chula Vista and beyond, but the project was ill timed and never gained the ridership it needed. Developer California Transportation Ventures filed for Chapter 11 bankruptcy last year, and who will ultimately control the asset remains uncertain.

On Otay Mesa, plans are evolving for a second border crossing that will be linked via an upgraded state Route 905 and Highway 11.

Mier y Teran added that a pedestrian bridge is being planned that would link U.S. travelers to General A.L. Rodriguez International Airport in Tijuana -- from which they could fly anywhere in the world.

"This would go directly into a secure part of the airport," Mier y Teran said.

While Otay Mesa has been hurting with an estimated 3.5 million square feet of vacant dustrial space, Mier y Teran said she knows of at least two major manufacturers that are moving into the area's industrial parks. The names of the firms won't be disclosed until the leases are signed.

Back on the coast, Mark Watton, Otay Water District general manager, said the completion of a series of sewage treatment plants means that after many decades of fouled surf, both Imperial Beach and Coronado should soon finally be free of the offending sewage.

"The Mexicans are currently working on a recycled system to reclaim the wastewater," Watton said, adding that Imperial Beach "is a pretty neat place" when it is free from pollution.

While the water gets cleaned up, Jim King, Imperial Beach mayor pro-tem, said the 76-room Seacoast Inn is supposed to be repositioned when developer Ashok Israni (also the CEO of Pacifica) secures financing. Wells Fargo Bank (NYSE: WFC) is expected to be the lender.

The luxury hotel, which may become a hotel condominium project when that market returns, will feature large suites and a rooftop restaurant.

King said at Ninth and Palm, a 40,000-square-foot shopping center called Miracle Shopping Center is being readied for renewal by retail and master plan developer Sudberry Properties of San Diego.

In National City, which has a new marina and a marine terminal that has handled the shipment of hundreds of thousands of cars per year, the Mile of Cars has seen better days, with four dealers closing in recent months. The good news, says Van Deventer, is Frank Toyota has recently re-opened.

"Automobiles are still a great market for us," Van Deventer said.