Jim Lasswell is a military man.

He spent 20 years in the Navy before starting a career in acquisition.

In 1997, he started at his current company, INDUS Technology Inc.

His late wife, Kathy P. Sridhar, was founder and president of the company and urged Lasswell to join her.

Both Sridhar and Lasswell were trained as engineers, but decided early on to allow their range of services to vary from financial management support to providing C4I communication systems.

INDUS started as a family business -- Lasswell, Sridhar and Lasswell's daughter from a previous marriage were the core team.

Sridhar was the president and did most of the customer relations work while Lasswell handled the books.

"That's a real interesting business to be working with two women who both think they control you," he said, with a laugh.

They were tasked with a couple minor projects for SPAWAR, but INDUS' first major job as a subcontractor was for Booze Allen Hamilton doing financial management.

The only trouble was, neither Sridhar or Lasswell knew much about it.

Sridhar started doing research to put together a proposal.

Lasswell credits Sridhar's innate abilities to learn quickly and write well along with a little luck as to why they received their first contract. They brought in an employee with far more financial expertise than they had. 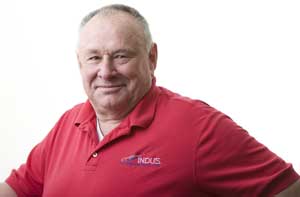 Financial management has since become one of their core elements.

Booze Allen Hamilton was their only customer at first.

Sridhar would visit the customer in the morning, then Lasswell would stop by in the afternoons.

Lasswell said the relationship with the customer he and his wife nurtured was one of the most important steps in building trust.

Lasswell credits "aggressiveness" on behalf of INDUS and the ability to follow through with what helped the company get off the ground.

"That early time was chaos," he said. "I was really lucky that previous jobs and education put me in a position to do anything I wanted."

After that first job, INDUS grew.

The company expanded and started branches in major defense industry hubs throughout the United States.

Laswell no longer was able to make personal visits to his customers, but trusted his employees to provide the tradition of quality customer service his family started.

Sridhar and Lasswell became active members of various defense industry organizations, with Sridhar becoming president of the NDIA in 2002.

That year, Lasswell served as vice president until Sridhar discovered she had breast cancer and began to weaken. She died in 2004.

Things started to change. Aside from Lasswell becoming the NDIA president, INDUS had to evolve.

The first major change was that the company from being a woman-owned 8(a) small business and to a disabled veteran-owned small business.

Despite the shake up, INDUS continued steady growth over the next few years.

Today, the company is a prime and subcontractor that provides engineering services, program management, IT services, logistics and acquisition to various Department of Defense agencies and the federal government.

Currently, the company employs 300 people and is on the verge of becoming a big business by the Department of Defense contracting standards.

Lasswell credits his people as the primary reason for success.

"There's no end to the success you can have when you don't care who takes the credit."

The company culture is based on taking care of their employees.

The concept allowed Indus to nurture its own employees and encourage them to attract good people. The company has a program where if an employee recommends someone for a job and they get it, the employee is rewarded with a bonus.

Send your comments to Jennifer.Lebron@sddt.com