By PADMA NAGAPPAN, Special to the Daily Transcript
Tuesday, August 10, 2010

As a retired master chief, Kurt Worden’s 25 years in the Navy gave him a solid background and extensive contacts within the military, but joining the National Defense Industry Association (NDIA) helped him connect with the business side of the industry.

“I knew the doors were there, I just didn’t know where they were,” said Worden, the business development manager for NOVA Power Solution. The conference, he said, allows people to present themselves as they are, before donning their official mantle and representing their business.

NOVA is a woman-owned, veteran-founded company and a subsidiary of LTI Data. It specializes in rack-mount rugged and ruggedized uninterruptible power supplies (UPS), designed to military standard compliance and especially suited to naval shipboard, tactical military and other harsh operating environments.

Nearly one-third of the UPS deployed in the Navy are made by NOVA. The company has a 15 percent compounded annual growth rate and presently employs about 50 people.

Established more than 20 years ago, it was one of the first commercial off-the-shelf rugged UPS technologies to be purchased by the Navy. 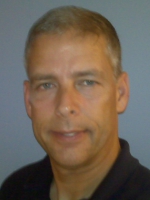 While it is branching out with similar products for the other military services, Worden explained that maritime power -- its area of expertise -- is very different from shore-based power.

Before he joined the company, Worden’s main responsibility in the Navy was to coordinate the deployment and training of personnel and material for the electronic systems on board the ship.

Prior to that, he was the enlisted adviser for the admiral’s battle group staff. “As you move up the ladder, it becomes an arbitrator’s job,” he said. When he retired, NOVA contacted him and asked him to remain in San Diego and assume his current role.

Worden pointed out that the power supply segment does not usually attract much attention since it’s a component piece, but the NDIA Gold Coast conference has afforded the company more visibility. He serves as the chairperson of this year’s conference.

“I had lobbied strongly to have the Marine Corps host the conference; it was my feeling that we had to get the large players involved. The Marine Corps small business office understood the value of working with small companies and felt this would be a good opportunity to showcase small business opportunities within the Corps and bring that value forward,” said Worden.

The Gold Coast conference was originally held in Oxnard at Port Hueneme as the outgrowth of small business efforts to help small companies learn about military business opportunities.

“Our intent was to rotate the conference between the six groups and focus on each one’s needs. Since the Marine Corps’ small business office is in the East Coast, it has never hosted the conference before, so this will be a first,” Worden said.

Over time, the event grew so large that Oxnard could not host it, and NDIA’s San Diego chapter lobbied to bring it here. It was held at the Town & Country Resort for several years before it outgrew that facility and was then moved to the Convention Center.

Last year, the conference drew 1,350 people and 230 exhibitors. Worden said there has been a 10 percent increase in attendance on average every year and it is well on its way to being sold out this year.

“It’s the individual committee chairs who are doing all the hard work. There are eight chairs and lots of volunteers,” Worden said.

Sponsorships are handled by Jennifer Albers of INDUS Technology Inc., who has played a key role in getting the conference funded. Jason Minter of Epsilon Systems Solutions Inc. oversees the program for the conference and is working with the Navy to confirm the speakers. Suzanne Sincavage, president and CEO of IDIQ Technology Inc., is responsible for VIPs and handles all the invitations.

Alyx Schmidt, also with Epsilon, is in charge of the venue, and Robin Parkes of Blackledge Inc. oversees the volunteer committee.

“My job is pretty easy; I just have to make sure they are all moving forward,” Worden joked, adding that as the central point of contact he is good at moving information forward and delegating. “And I get to handle disputes. The Gold Coast is too big for any one person to handle, so it takes the whole team to put it together.”

San Diego’s NDIA chapter is the most active in the country, and Worden said a good portion of the small business committee’s work originates locally.

“Small businesses can be nimble and can adapt, but for large-scale work you need large contractors, and for contract opportunities, the military. The Gold Coast is focused on bringing these three entities into the same space to talk about what they need and what they do.”