Executives: Not enough work to go around, even in public sector 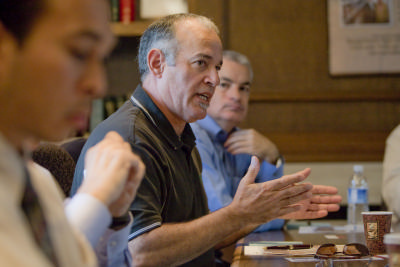 Current industry conditions and predictions of what could be ahead were the main focus of various Southern California construction executives during an executive roundtable discussion at The Daily Transcript offices in early August.

Executives from various markets inside the construction industry touched on the sector trends, bidding patterns and fallouts happening in the current economic recession.

Most agreed that there is hardly any work in the private sector -- and that even though the public sector has work, there is not enough to go around.

“All of the federal money being spent in San Diego, a lot of it is in Camp Pendleton,” said Jim Roherty, president of Pacific Building Group. “In a year from now, a third of it is going to be at the hospital project up there. Half a billion dollars.”

RQ Construction Inc. is primarily a department of defense builder, and President and CEO George Rogers said he “can’t imagine companies that are working in the private sector exclusively.

“The federal government has been very slow in procuring work … there is no fat anywhere.”

Diversity seems to be the key to staying afloat during this time, according to Christene Close, president of Murrieta Development Inc. She said her 30-year underground utilities company finally moved some of its resources from the private sector into receiving federal work.

She added that the company is trying to get to know some of the major general contractors in the federal government sector because networking and building relationships are the keys to receiving work in her opinion.

Ron Rudolph, vice president and director of operations with Turner Construction San Diego, echoed similar sentiments. He said you can’t ignore that the dollars are flowing from the federal government.

“A lot of us here in the last few years have seen what the economy has done to the private side and had to look at the public sector as making up that difference,” Rudolph said. “You have to be able to grab the apple while it’s there.”

Mike Henderson, president and CEO of KTA Construction, said competition is also just as tough at the local agencies, where you might see 15 bidders on a normal basis.

“It’s very competitive,” he said. “It’s very tough to get a job ... You need to really pay attention to what you’re doing, and you’re really cutting every corner you could cut. It doesn’t just end at bid day, it goes on after that. You’re continually trying to find ways to improve (a) project.”

Because of the passing of so many school bonds locally, school construction will be somewhat of a hotbed of activity, according to Bill Sharp, executive director of business development for Barnhart Balfour Beatty.

“They passed bonds … they are multi-year … and some of these are six and eight years out,” Sharp said. “The educational market is still there.”

Executives talked about some of the positive forecast indicators, including the Architecture Billings Index, Reed Construction Data and the McGraw-Hill Construction reports.

“This helps us from a design perspective to try and plan and allocate where our resources should be put,” said Jeff Hankin, principal and vice president of Sparling.

Others said they get their future outlook by talking to local clients, architects and engineers, which they said gives them a more accurate reading of the Southern California market.

“A lot of those (forecast) are driven nationally, where a number of us here are more focused on the southwest or San Diego region,” said Pacific Building Group’s Roherty. Most of these national forecasts, he added, only look at public projects -- thus skewing the numbers higher, as in the case of military contracting.

Most construction executives said that, due to the current recession, there would also be work from subcontractors who could not finish a job. Because there is little work, subcontractors are bidding at record lows on public sector projects just to keep the lights on and the doors open at their small companies -- and are actually losing money.

Rick Cohen, executive vice president of Jaynes Corp., said the company has taken over and finished three projects and is looking at two other projects.

“I think that’s a market that’s going to be out there for contractors who know how to go in and do completion work, and that are willing to take the risk and try to figure it out,” said Cohen.

Joseph Binning, president of MEPCor Inc., added that owners are at fault in these cases, since most “look at the profits and not the quality” when it comes to low bidding.