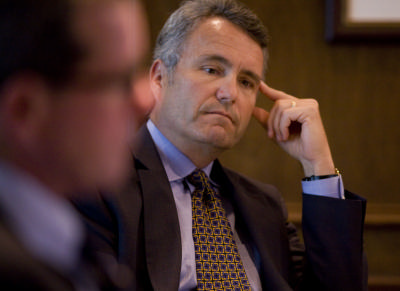 The answer to the question of “Where is the bottom?” depends on the asset class.

"Hotels are nowhere near the bottom," said William Hoffman, Trigild president during a recent roundtable discussion about receiverships.

Attorney Gordon Gerson, who is president of the San Diego Receivers Forum, agrees.

"There are probably 1,000 hotels out there that haven't been reported yet," Gerson said.

Gerson said regardless of the asset class, the magnitude of the woes may be difficult to ascertain because "lenders have lots of bad loans they have yet to take action on."

Robert Richley, Douglas Wilson Cos. president, said what has been happening to hotels notwithstanding, he is at least seeing some stability in the market compared to a year ago.

Karras said there at least a couple of fundamental problems. One is the fact that companies have been doing more with fewer employees.

"Office has the furthest to fall," Karras said, adding that he believes it will likely taken seven years before the market has fully recovered.

Karras said this also means that companies are not only downsizing, it can take a long time to backfill vacated spaces when they do move.

What puzzles Karras is that even with all this uncertainty, office building prices are often bid upwards --even in cases of half empty buildings.

Trigild’s Hoffman also doesn't believe the office properties will be getting occupied anytime soon. Coupled with loans that are underwater, this means these assets may be worth as little as half what they were worth three years ago.

Karras said if there is any good news from the landlord's perspective, it is that most of the commercial sales transactions are standard rather than bank-owned sales.

Jacquet said, the Inland Empire “is really hurting" across most asset classes after foreclosures slammed the area in the recession.

For those who can survive the downturn, Lorne Polger, Pathfinder Partners LLC managing director, said there has never been a better time to be a tenant.

The roundtable participants also discussed the fact that loans are being purchased at bargain prices. Sometimes -- as in the case of the La Costa Resort & Spa -- they are acquired by entities who own the real estate itself.

This doesn't mean these loans aren't in high demand, said John Fleming, president of Legacy Realty Capital Inc. Depending on the underlying real estate, the properties will frequently have multiple offers.

In the meantime, both Hoffman and Allan Wasserman, a Fidelity National Title senior vice president, said they have seen foreclosures accelerate.

We had 34 foreclosures in January and we have 70 to 80 per month now," Wasserman said.

Hoffman added that these are almost exclusively as the result of monetary defaults versus a structural default due to a maturing loan.

So when will things get better? None of the participants ventured a guess on how long hotel properties might be in the tank or on how long retailers might do a vanishing act.

Karras said office properties may be seven years from a rebound.

Most industrial submarkets here are still relatively strong except Otay Mesa, which has about 3.5 million square feet of vacant space as a result of overbuilding in the latter half of the last decade. That leaves apartments, which, as an asset class, have continued to perform well here through the downturn.

"Multifamily is the easiest sell here today," Hoffman concluded, noting that many areas around the country could not consider themselves so fortunate.