By JENNIFER MCENTEE, Special to the Daily Transcript
Thursday, August 26, 2010

“When the market comes back up, especially in the beginning stages, it’s very subtle. You don’t really notice it. Usually you’re looking over your shoulder a year later and say, ‘You know, that’s when the bottom of the market was.’ That’s happening right now.”

Williams doesn’t claim to be an economist, but says he knows what he’s seeing in his own industry and, more specifically, in his own company.

“We are definitely climbing out of the hole right now,” Williams says. “It might be that an agent, instead of taking one listing in a period of time, would take two. For them, it feels like a slight increase. Maybe they got lucky. But when you’re sitting here and you’ve got 40 agents and in that period of time they each take one additional, that’s 80 listings. That’s a huge increase as you come off the front line. We’re seeing that.” 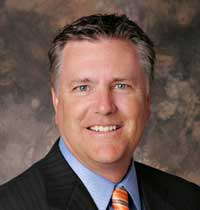 A recent promotion makes Williams the newest managing director at Marcus & Millichap. He’s based in the San Diego office in the University Towne Centre area, but also oversees offices in Ontario, Newport Beach and Las Vegas. With the exception of a four-year stint in which he oversaw sales for recording studio equipment company Sweetwater Sound in Fort Wayne, Ind., Williams has been with Marcus & Millichap since 1991.

He says it has taken a number of years for the average investor to get excited about real estate again.

“I think that there’s an awful lot of capital sitting on the sidelines, and they’re all waiting to buy. The reason I know we’re past the bottom is most investors will now say, ‘I wish I had bought that deal six months ago.’”

As the economy transitions, so too does the demand for certain properties.

“On the buy side in San Diego, everybody wants apartments, but there aren’t a lot of sellers in the market,” says Williams. “Across the country, the hottest product is single-tenant.”

“There’s a lot of velocity in the market in single-tenants. That means you get a lot of sellers selling and you’ve got a lot of buyers buying.”

The brisk pace of single-tenant transactions is due in part to the fact that those properties -- often pad sites in front of shopping centers -- were built by developers who never intended to hold on to them, he says.

Williams says a lot of investment dollars leave San Diego because those who own property here can better leverage their equity dollars elsewhere.

“We’re willing to pay more in other markets, and that has raised the bar across the country,” he says.

The San Diego region remains an attractive market for commercial investors. Says Williams, “There’s a belief, rightfully so, that there will always be demand here.”

While most investors make buying decisions based on factors including demographics, job formation and the credit of a tenant, there are still those who buy on emotion, says Williams.

“People who buy on emotion are buying, in part, because they just want to own that real estate. They have a belief system that says coastal real estate will always be valuable. ‘I’ll overpay it and I’ll keep it for the rest of my life.’ There’s more of an emotional attachment to it.”

Williams has become attached to San Diego, too. A graduate of Torrey Pines High School and San Diego State University, he lent his expertise to the development of University of San Diego’s real estate master’s degree program.

While growing up both on the East and West coasts, Williams was often told he would make a good salesman. He used to bristle at the suggestion. “My wrong definition of a salesman was saying something that you don’t believe. I couldn’t just sell you something.

“What’s nice about our business is we go out and pick what we’re going to sell. We sell ourselves first, and then the real estate second.”