By JILL ESTERBROOKS, Special to the Daily Transcript
Thursday, August 26, 2010

Jody James Watkins, president and CEO of Watkins Landmark Construction, has scaled some of the highest mountains in North America. From the summit of Mount Rainer to the peak of Mount Whitney, he’s braved grueling mental and physical challenges to “stand on the top of the world.”

And while his head may have been in the clouds after conquering those towering zeniths, Watkins’ feet are now firmly planted on the ground and his eyes affixed to elevating his fledgling firm into a construction company with building projects topping $50 million annually.

“I’d love to someday scale one of the Seven Summits,” Watkins said. “But right now all of my time, energy and resources are fully focused on surviving this economic storm and reaching our lofty business goals.”

After establishing his general contracting and construction management company in 2004, he quickly discovered that in business, as with mountain climbing, “there are no shortcuts to the top.”

“The construction landscape is much different today than when we launched,” admitted Watkins, a graduate of Arizona State University who spent three years in the aerospace industry back east before switching careers and moving west.

But with the determination and persistence characteristic of a true mountain climber, Watkins has found that even in an economic drought, it’s possible for a business to thrive.

Watkins, 42, is “well aware of all the doom and gloom out there in the building and construction industry.” He just chooses not to dwell on it. 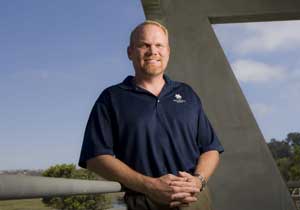 To that end, he’s redoubling his efforts to retain the company’s skilled work force; find new clients; respond to what customers want, such as quality work and fast turnaround; and contain costs in ways that can strengthen the company, instead of weaken it.

That’s a tall order even for the uber-optimistic and highly motivated Watkins, a 20-year industry veteran who previously worked for DPR Construction and Clark Construction on such landmark projects as Petco Park, Indian Wells Tennis Center and the Pacific Athletic Club.

But so far, his strategy of “never giving up” and “never taking your foot off the gas” appears to be working.

At a time when many construction companies are trimming staff or shuttering their doors, he said Watkins Landmark is “holding steady.”

The company has 12 employees, up from the initial three it had upon founding, and in each of the last five years it has seen incremental growth in project numbers, types and margins.

The key word is diversification, noted Watkins. “A construction company is all about its talented people. If you have the people to diversify, especially now, that’s huge.”

Watkins has assembled a core team with expertise in a wide range of market segments including retail, commercial, residential and industrial.

“We’re building a foundation for a company that will last,” he said. “Anyone can buy equipment and tools. That doesn’t make you a contractor. This business is all about talented people who can bring their skills, contacts and resources to the table.”

He hopes to tap this in order to better compete for the limited public and private projects that are finding financing and moving forward.

“There is less work out there and it takes more work to get it,” said Watkins, whose Del Mar-based firm ranked 28th largest general contractor in the county according to a recent survey by The Daily Transcript.

He said “land development is coming back into the market,” and is an area where Watkins Landmark has shifted its focus.

“We are starting to see life in that segment again,” said Watkins, whose company preps land and subdivisions for custom homes costing more than $2 million.

Just a mile up the road from its offices overlooking the fairgrounds and San Dieguito Lagoon, Watkins Landmark crews are grading two custom home pads on 1.38 acres at the new Racetrack View development just west of Interstate 5.

This is the second project that Watkins has worked on with developer Brett Ames -- one of the company’s first clients. The other project was 16 custom home pads at Shoreline Pointe in Carlsbad.

“Growing existing business and servicing repeat customers has been essential for our continued success,” Watkins said.

Teamwork, he said, has been another major factor in the company’s survival during these tough economic times.

“That applies not just to our company team, but the owners, architects, consultants and subcontractors we work with every day,” he said.

He also noted that competition is “particularly intense. You’ve got a lot of contractors chasing smaller pieces of the pie. They need work, too, so they’re cutting prices.”

A major challenge for Watkins and other leaders in the construction industry is educating clients about the value of hiring experienced and honorable contractors.

Often developers, general contractors and industrial clients may consider pricing from a firm that does not have the experience on a particular project or has not included all the items requested, he explained.

“As I tell prospective clients regarding particularly challenging jobs, this is what we do every day,” said Watkins. “We can accomplish their goals because we have been there and done that before.”

Like most small and midsize companies, Watkins Landmark Construction is regionally focused and relies heavily on repeat clients.

Earlier this summer the company started construction on a charter school project across from the famous Watt Towers in South Los Angeles. It also is working on a retail project near San Louis Rey Downs in Oceanside and renovating an 18-unit mid-century apartment building in the North Park neighborhood of San Diego.

Watkins predicts the recession is winding down and that over the next few years the construction industry will slowly climb out of recovery.

Like others who’ve managed to survive -- if not thrive -- despite the economic downturn, he’s now turning his attention to new strategies for climbing up and out of the recession.

“It’s a vulnerable time,” he said. “For some firms that relates to having cut back so much that you can’t gear up fast enough to go back into normal mode. That’s when the competition eats your lunch.”

May 19, 2015 -- Executive Editor George Chamberlin talks with Jody James Watkins, president and CEO of Watkins Landmark Construction, about his unique projects such as the Indian Wells Tennis Garden stadium, and being a semifinalist for the 2015 EY Entrepreneur of the Year award.