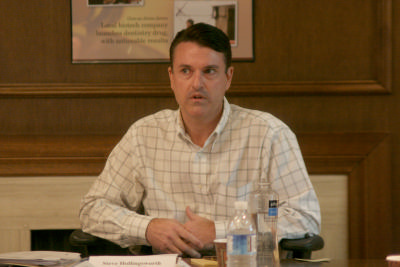 Local “green” businesses say getting customers on the green bandwagon often sells itself from an ideological standpoint, but one challenge is getting people to realize how it benefits them personally, especially from a financial standpoint.

Education is the key, they say.

How to build that education was the focus at a Daily Transcript executive roundtable Oct. 6, where eight executives from a wide variety of emerging green companies and established disposal and construction-related companies offered each other insight into how they’ve each tackled the challenge.

“People want to be green if it’s not going to cost them a huge difference,” said David Steel, chief executive officer of the Green Chamber of San Diego County.

The education comes into play especially when customers are bombarded by slogans and claims of sustainability. That’s where businesses have had to become more aware of how to differentiate themselves from less honest operations.

Michael Hurst, CEO of ChloroFill, a biotech company designed to take carbon waste products and turn them into something useful, said overpricing and overstating results is against his company’s core values, but that companies with less ethical practices make marketing his more difficult.

“There is not only a willingness to give up what is typically paid, but on the flip side, I think a lot of manufacturers and re-salers have been gouging just because they do have a green product.”

Instead of gouging his customers, Tom Tullie, president and CEO of EcoATM -- an electronic device recycling company -- actually gives money to customers, at least on one end of the business. After paying customers for their unwanted electronics, Tullie sells the items to other companies for them to be refurbished and sold again.

“It’s convenient. We go to the heart of -- charity is a nice thing, but people really like it in their pocketbooks,” Tullie said. “So we solve the financial aspect by buying the devices back from them.”

Coming up with innovative green promotion and education strategies isn’t always easy, but sometimes, Steel said, that takes care of itself.

“The entrepreneurs that are coming out are making it more competitive,” Steel said. “The good thing is once somebody does it, it starts to create its own awareness.”

Transparency of products and the methods behind determining their green value is something each of the business leaders agreed upon, saying giving actual measurements is essential to truly educating a customer.

“They need to know that, for instance, the lawn care industry or the landscape industry is really dirty before they actually make the change,” said Antranik Zadeyan, co-owner of Clean Air Lawn Care. “If I tell them, for example, one of our statistics that one hour of a two-stroke engine gas mower emits the same amount of hydrocarbons as an SUV driven 23,000 miles, they almost don’t believe you.”

The Green Squad at Waste Management has been working to show its clients how to implement zero-waste strategies in which waste materials are turned into usable items. Mike Schwartz, Green Squad business development manager, said using specific metrics could help bridge the gap between benefit and disbelief.

Such disbelief is a common roadblock for many green businesses, which have come to find that even transparency has its limits.

“It’s one thing to have a guy in front of you drink some cleaner and say, ‘See how safe it is?’ remarked Steve Hollingsworth of the corporate environmental, health and safety division of Hawthorne Caterpillar. “That’s literally what happened on the front porch of my own home. I don’t care. (Customers want) something scientific of what’s the advantage over something else, not that it’s just your sort of standard that you started today.”

The market sector also plays into how successful a green company is in getting its message out. The executive director of the hazardous waste company Ingenium Group LLC, Gary Lundstedt, said dealing with smaller clients is toughest in the current economy.

With a down economy, green businesses still comprise a small percentage of total business, but optimism reigns among those willing to stick it out, even when dealing with smaller clients. They not only believe that sustainability is the right way to go, but also that the world is catching up with them.

It’s an uphill battle that Sidnee Chong, founder and CEO of EcoPackStore LLC, sees flattening out. EcoPackStore specializes in offering eco-friendly products to businesses and homes. Some things Chong has noticed lately tell her that things are changing, which she views as a positive sign for the future of green business.

“I would say two years ago if I would have approached (a client) and said, ‘Hey, you should be changing your to-go boxes with biodegradable compostables instead of Styrofoam,’ they’d be like, ‘Yeah, we’ll pay too much for it.’ But now, they’re coming to me and saying, ‘Hey, my customers are demanding that!’”

Show us an objective Present Value (PV) comparison with a cost of capital of 8%, 20 yrs, with maintenance, replacement, guarantees, and with and with & w/o existing taxpayer subsidies for equipment and financing for a 2500 SF home and a 30,000 SF office building for wind and/or solar as compared with energy from standard utility companys. Add in the subsidy costs received by tax payers paid directly to companys for starting up green utility production companys. Plus, when there is no sun for solar or wind for turbines then what? Plus, add in the cost for solar and wind for present utility rate payers having to pay higher utility bills for Sempra acquiring and devloping mandated wind and solar farms. Show all hidden costs. Let's finally see all the numbers. Prove it up!!