Smart grids – the next gold rush?

By PADMA NAGAPPAN, Special to The Daily Transcript
Thursday, October 21, 2010

Our electric power infrastructure, also known as the grid, is complex -- it generates more than 1 million megawatts of electricity and spans 300,000 miles of transmission lines.

It is also rapidly running up against its limitations, since the risks associated with relying on an overtaxed grid grow in size, scale and complexity on a daily basis. This has convinced policy makers and stakeholders that what we need is a smart grid.

In other words, it would change the electrical grid of the 1960s and ‘70s into a modern network that uses microprocessors and software to work efficiently and connect to renewable energy generation. It will enable multiple applications to operate over a shared, interoperable network, muck like the Internet works today.

“Smart grid” became a catchphrase in the last couple of years, before which it went by the term “intelligent grid,” a concept that has been deliberated on for at least a decade.

According to the Department of Energy (DOE), the current grid is 99.97 percent reliable, but it still allows for power outages and interruptions that cost Americans $150 billion each year, which works out to about $500 per person. And this is only a part of the considerable challenge associated with a 20th century grid grappling with 21st century challenges. 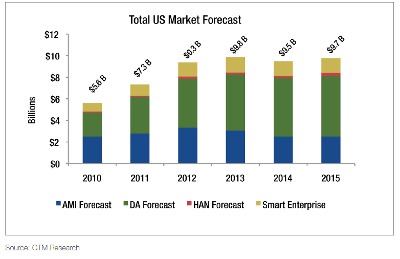 Hence the need for a smarter grid, that can better manage and control demand-response and be able to foresee outages and intelligently redistribute power.

Emerging market, growing into an industry

In 2009, companies in the smart grid market represented one of the fastest growing sectors within the cleantech industry and consistently received more than half the venture capital investment.

A build-out of the smart grid could also be one of the largest creators of wealth in the decade, and industry analysts predict the smart grid will “spawn new Googles and Microsofts.”

“The stimulus last year helped kick-start investments in this area,” Leeds said, adding “2010 has been a breakout year.”

He attributed this to multiple drivers, including policy, venture capital appetite, the belief that these technologies will take hold and cost.

“Carriers such as Sprint and AT&T are going after this market and competing with smart grid vendors. We’ve got good leadership in the DOE with (U.S. Energy Secretary) Steven Chu. There has been a lot of political will in this direction. I believe this is one of the next great industries,” Leeds said.

San Diego now has a growing cluster of vendor companies looking to tap into the smart grid gold rush. At last count, the local race into this nascent market included Proximetry, Solekai Systems, PCN Technology, On Ramp Wireless, Pervasive and, most recently, Grid2Home.

Leeds considers the competition a good thing. “You have a very crowded landscape of vendors and the consumers are the ones who benefit, since prices will go down. You will see next-generation hardware and software enter the market very quickly. It’s a real industry now, and industry events have gotten bigger, especially in the last two years.”

San Diego is at the forefront of U.S. cities working on establishing a smart grid. The city’s effort began in 2005. Austin, Texas, and Boulder, Colo., also have made considerable progress in this aspect, having started in 2003 and 2008, respectively.

Each effort began with replacing manual meters with smart meters. In 2009, President Obama called for 40 million smart meters to be installed -- a figure that Leeds thinks will be surpassed by 2015.

They are the most visible example of smart grid technology and represent the key building block that will allow other more advanced developments in operating the power grid.

Once the rollout is completed, there will be more than 2 million data points in the utility’s system, and it will manage all of this new information with the help of the smart grid’s digital technology.

“The way SDG&E has approached it is sensible. It’s a forward thinking utility, with an excellent executive team in place,” Leeds said, adding, “California is ahead of the game; and unlike Austin and Boulder, SDG&E has to contend with electric vehicles, too.”

Leeds was referring to the more than 1,000 Nissan LEAF electric car orders placed in San Diego. The first of those will be on the roads in early 2011, requiring SDG&E to deal with the need for charging stations, both at car owners’ homes as well as at public locations.

The stations will have to be integrated with a local power grid, and SDG&E will have to manage the “cluster effect” of energy demand when many EVs are recharging in the same neighborhood.

Lee Krevat, director of smart grid technology at the utility, told the Transcript that he just test drove the LEAF and has ordered one for himself.

“The charging station is a large load, as large as a house with an A/C. We need to ensure that power reliability is high and does not affect neighboring homes,” Krevat said.

About 1,450 commercial and public charging stations will be installed locally by mid-2011, many in public areas such as malls or transit centers. There will also be 60 fast-charge stations installed on freeways.

An additional 1,000 charging units will be installed at the homes or businesses of the first 1,000 purchasers of the Nissan LEAF that meet the requirements of the project. At a recent smart grid forum panel, Krevat raised questions about what to do when one family orders two EVs, since the plan calls for installing one charging unit per home.

These are among several challenges state utilities are grappling with, as big changes happen.

SDG&E is also working on a micro grid project in Borrego Springs, which has a high concentration of solar energy. The micro grid will test and deploy various “smart” technologies, such as energy storage, smart meters, energy-management systems and integrated renewable energy generation.

A micro grid, put simply, is a local energy network where the energy is generated onsite or close to it.

With this project, the utility plans to demonstrate how to maintain reliability in a more complex grid, leverage distributed resources to benefit the community and electric system, enable more active participation by customers, and maintain power or ride through an outage, even when the larger grid is experiencing problems.

Krevat considers this project to be a laboratory in action.

“We can see on a small scale an end-to-end version of the smart grid, from customer-generated solar power, to battery storage to automatic power restoration,” he said. “Today’s smart meter alerts us when a customer’s power is disrupted. Eventually, the technology will become sophisticated enough to alert us when a system is about to fail or remedy a potential problem before it occurs. So, the grid will self heal -- that is, sensors will automatically reroute power to restore an outage without any human intervention.”

With more renewable energy being added to the power source mix, there is also a rising need to manage the fluctuation of wind and solar power, and the utility expects that a smart grid will be a vital solution to that challenge.

Where the opportunities will be

While meters have had the biggest rate of adoption, Leeds expects distribution generation will ramp up quickly.

He pointed out that since energy management systems and distribution management systems have never talked to each other before, when that changes, it will become the biggest market, where devices other than meters become networked.

Krevat, on the other hand, thinks that smart meters represent the biggest growth area, followed by batteries, for energy storage.

“San Diego has so many innovative companies in the utility sector. I think there’s potential for growth in all of the smart grid areas. A lot of the progress has been in technologies that interact with consumers. I hope that in two years, we will just be calling it the grid, and it will be how we run the electricity,” Krevat said.

A well written piece decoding the concept of "smart grid"!

I learnt a lot abour the nascent technology that might become the most important innovation in improving efficiency in electrical energy production. If only we can reduce transmission loss of energy, we will be on our way to solving energy crisis. Nagappan deserves recognition for making the subject easily readable and understable.