To the uninitiated, downtown San Diego -- with its soaring skyscrapers and bustling streets -- might not seem like a green mecca, but it is.

Urban environments with their high-density housing, easy access to mass transit and walkable neighborhoods can be much easier on the planet than their suburban counterparts. Consider this: The typical downtown resident uses 20 percent less energy, 50 percent less water and travels 60 percent fewer miles than someone in the suburbs.

Despite those impressive numbers, Centre City Development Corp. (CCDC), working on behalf of the city’s Redevelopment Agency, is looking to make downtown San Diego even more eco-conscious, taking it to the forefront of sustainability.

As part of that effort, CCDC recently created the Centre City Green initiative to outline long-range comprehensive goals for downtown and serve as a model for the entire city. Among the master plan’s key components are rewarding developers who exceed California’s green building standards, installing energy-efficient lighting along streets and sidewalks, and making streets more bike and pedestrian friendly. 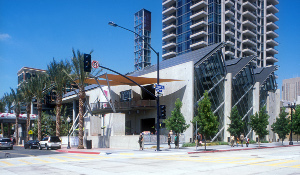 Solar panels line the roof of the Children's Museum downtown.

While other cities have tackled pieces of the sustainability puzzle, few have taken such a holistic approach, said Sachin Kalbag, senior planner at CCDC and project manager of Centre City Green.

“This long-range sustainability plan is one of the most comprehensive in the country,” he said.

Another key difference is that Centre City Green wants to reward developers who go above and beyond current green building standards, instead of penalizing into adopting those practices, Kalbag said. Incentives include both increasing building density and providing expedited reviews.

While the very mention of the word green might make some builders wary, that’s not the case with Centre City Green. That’s because everyone in the community -- from residents to developers to environmental groups -- helped craft the master plan.

“We have environmental groups on one side and the building industry on the other,” Kalbag said. “They’ve come together on this one. I think that’s a pretty big accomplishment.”

While green building is important, the real selling point for most people is the emphasis on green streets, Kalbag said.

“They see sustainability as an amenity,” he explained. “It’s hard and tangible, and it improves the quality of life.”

The goal of the program is to make sure that key streets downtown aren’t just for cars but for people, too. The plan calls for wider sidewalks, more greenery, improved bike lanes and bike racks as a way to create and connect green space throughout the urban core. The first phase will begin with the installation of the first bike racks starting early next year.

Still, bigger plans are in the works, too. One idea is to have a shuttle that circulates throughout downtown, providing easy access to all of the area’s neighborhoods for both residents and visitors alike. A rider could hop on at Horton Plaza and ride to Little Italy or to East Village.

That might not seem so green at first blush, but it helps reduce emissions and traffic while boosting local businesses, Kalbag explained.

“Being green is not just about photovoltaic or solar roofs,” he said. “It’s about stimulating the economy, too.”

For more information on Centre City Green, go to ccdc.com and visit the Programs section.

Submitted by Jennifer Davies, marketing and communications manager for CCDC