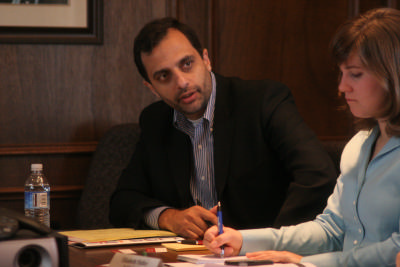 The wireless health industry is close to realizing its potential for improving health care and cutting costs, according to industry leaders. There just needs to be one major breakthrough.

At a recent Daily Transcript roundtable, leaders in the wireless health industry -- who make products from glucose monitors to phone applications that help doctors view patients without being in the room -- said that in some ways the overwhelming number of products is part of the reason there hasn’t been more mass adoption. They said once someone finds a way to bundle products so they talk to each other, or creates a tool that hospitals feel they can’t function without, the wireless revolution will truly be under way in health care. And that will probably come soon.

“For five years, the question has been, ‘When is this going to happen?’ The hype cycle has certainly grown in 2010 to the point where people are asking, ‘OK, where is this boom that you’re describing?’” said Rob McCray, president and chief executive officer of the Wireless Life Science Alliance. “I think 2011 is going to be the year that companies with government funders look to prove out what they’re doing.”

The business leaders at the roundtable pointed out that there are a lot of wireless products already in use in medicine. The phone company GreatCall, for example, has devices built into its phones that remind users when to take their pills. Qualcomm (Nasdaq: QCOM) has put a lot of resources into making wireless health products move faster, “collapsing time and space,” as the company’s Vice President of Health and Life Sciences Don Jones put it.

But there is still a sense among many patients that for all the hype, there should be far more video conferencing with doctors, pills that can transmit signals from inside the body, better automated insulin pumps and other technologies that have been discussed for years. Ray Ghanbari, chief technical officer and executive vice president of product development for PatientSafe Solutions, said some of these things exist, but in order to start showing results, they need to work in concert with each other.

“You can devote your time to invest in the dots or invest in the lines to connect the dots, and I think wireless health is one of those unique areas where there’s tremendous opportunity to create an entire constellation of new dots,” Ghanbari said. “But (the question) is can we tie together that existing investment in a compelling way that actually leads to the right behaviors.”

Mohit Kaushal, executive vice president of business development for the West Wireless Health Institute, agreed. He told the story his friend, the chief information officer of a hospital, who is trying to lower the readmission rate for people with diseases like congestive heart failure, because insurers are soon going to stop reimbursing for readmissions after 30 days. Kaushal’s friend had three different companies approach him, each with a product that offered a piece of a solution. If all three were combined, they could form a full solution, but the products can’t speak to each other, and the hospital doesn’t have the resources to connect them.

As with all business, wireless health companies need to follow the money. Obviously providing connectivity solutions would be valuable to hospitals and other health care providers, so that is one solution. But they also need to prove to their investors that the products will be popular, and one way to do that, business leaders suggested, is to produce goods that make the lives of doctors and nurses easier.

Jones from Qualcomm mentioned a Texas company called AirStrip, which uses smart phones to display the information on monitors. A nurse can call a physician and show them the activity on a monitor, rather than trying to describe it. The product went from 0 to almost 250 hospitals in 18 months. Jones said that’s not just because it can improve patient care, but it improves the quality of life for doctors as well.

“This is not so much a health care product as it’s a physician lifestyle product,” Jones said. “This actually answers the question, ‘Do I turn the car around?’ ‘Do I leave the kids’ soccer game?’ ‘Do I miss dinner?’”

Securing adoption also means creating truly useful products. Mike Martino, senior vice president of strategy and innovation for Carefusion (NYSE: CFN), said there has been a “medical arms race” for years, with companies trying to come up with more and more technically advanced products, some of which are important, others not.

“Picking the right shots on goal initially is really an important part of driving the return on investment,” Martino said. “We probably don’t need a wireless bedpan.”

In many ways, this represents an inherent difference between the engineers creating devices and the doctors and nurses who are the end users. Scientists want to create as many cool gadgets as they can, and transmit as much data as they can because they find it interesting. Doctors and nurses just want something that works, and if anything, they want less data. They only want to know the information that matters to treating the patient.

Another example of a struggle created by different worlds colliding is the needs of business versus the needs of medicine. Doctors want solutions that will work for everyone, whereas most businesses are happy for a 15 percent adoption rate. Business also likes to be able to sell early stages of products while still working to refine it, but in medicine, the Food and Drug Administration does its best to ensure a product is perfect before it ever goes on the market.

McCray, from the Wireless Life Science Alliance, said he would like to see a little more risk tolerance when it comes to wireless health care.

“That means you have to be politically willing to put up with some bad outcomes. Not the thalidomide type,” he said, referencing a sedative used in the 1950s that was found to cause birth defects, “but where you can have a failure rate but you’re going to use that to then improve the product next year, which demonstrably works in consumer electronics and the auto industry.”

With change s coming as part of the federal health care reform, and general demand to keep costs down, the local wireless health care leaders said they believe there is a critical mass for adoption of different technologies, there just needs to be a few remaining breakthroughs before the use of wireless technology becomes common. Just what those breakthroughs will be aren’t yet clear, but with the amount of resources poured into finding it, most leaders seemed to think it’s coming soon.

“The economics is going to force it,” McCray said.

Cyberknife of Southern California at Vista

Not only does the future of wireless healthcare need to be bundled but more than ever the end user's needs will have to be considered. The "end user" will include tech savvy and not so tech savvy baby boomers and trained and semi-trained home healthcare personnel. In order to create these user friendly devices it will be imperative to do the necessary research prior to product development. I am a baby boomer and your ultimate future consumer and I believe that my generation will drive the economics that will drive the change.