San Diego health care company Skylight began its life in the entertainment business. Its product allowed hospital patients to order movies to their rooms. But President and Chief Executive Officer David Schofield thought it could do so much more.

“Our system today allows us and the hospitals to really personalize the patient experience,” Schofield said.

Several years after it’s founding, Skylight began branching into other areas, helping patients learn about their conditions, order food and give the hospital feedback, all through the television set in their room. The company’s product is designed to both improve the patient’s stay, and help hospitals provide better care. In the coming years, as the recent health care reform act requires more and more measurable metrics from health care providers, Schofield envisions his company becoming more important than ever.

“It’s not just this nice thing to do,” Schofield said of the services his company provides. “It becomes a pretty hard metric.” 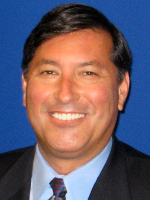 As a result of the recently passed health care act, in 2013 hospitals could lose a percentage of their Medicare reimbursement if they do poorly on a survey called the Hospital Consumer Assessment of Healthcare Providers and Systems, better known as HCAHPS. This is a program administered by Centers for Medicare & Medicaid Services, an agency of the U.S. Department of Health and Human Services. Schofield said Skylight can help with this because the program can gauge a hospital’s performance in certain categories, like staff responsiveness, alerting management to areas that need improvement before the HCAHPS surveys go out.

“We’re talking hundreds of thousands, millions of dollars, on the table that’s going to be at risk,” Schofield said. “For the hospitals that proactively understand that, those are the ones that are real excited about our system today.”

Another change that is part of the reform act is that hospitals are required to install and use electronic medical records. Some criteria to get funding for this include deploying effective health education and giving patients more effective information on discharge. Schofield said customers can use Skylight to get hard data on those criteria and get access to stimulus dollars.

“If you think of those conversations, it’s much different than, ‘Hey, I got movies for you to play in your room,’” Schofield said with a laugh. “That’s how people are looking at us today.”

And more and more people are looking to Skylight. The company is in 70 hospitals all over the country, including locally at Sharp Grossmont Hospital. The company has been growing 56 percent a year every year for the last five years. In early November the company moved into new offices in Sorrento Valley.

The Skylight system is a program that can be run through any television, so hospitals don’t need to buy new equipment. Through the screen, patients can see the hospital menu and order food, watch videos on how to prepare for and recover from any procedures they might have, and learn about their medications. If a doctor wants to put a patient on a special diet, they can limit the food options they see on their menu. The program also asks the patients to take surveys, helping the hospital to see if they’re serving their needs.

Schofield said the program has proven to turn beds over faster, because housekeeping can automatically see when a patient has moved out. It saves nurses hours of time since they don’t need to come into a room and set up a DVD player to show patients videos, they’re all right there in the program. Hospitals that use the program waste less food, Schofield said, because they aren’t sending things the patients don’t want or can’t eat.

Skylight helps hospital CEOs compile databases to look for red flags in procedures and look for ways to streamline and reduce costs, and also provide a better care experience.

“We don’t then claim, ‘OK, you can fire a bunch of nurses,’” Schofield said. “What we do say is, it takes the administrative load off the nurses’ task and allows them to focus on clinical care.”

Schofield’s background is not in the medical industry, but he has experience in developing efficient and scalable multi-unit businesses. He started his career at a franchised printing company, then worked at the corporate offices of Office Depot (NYSE: ODP), before moving to nutritional and vitamin company called Rexall Sundown.

When the Skylight board of directors began looking for a CEO in 2001, two years after the company was founded, Schofield said they wanted an operator who could develop a nationwide service organization. After he was hired, he began working with the founders to expand the ways hospitals used the product.

Schofield admitted he somewhat stumbled onto some of the ideas that expanded Skylight’s services. For example, nurses suggested that since the program could show Hollywood movies, maybe it could show instructional videos, too. Schofield said the company often takes advice from the health care providers who see Skylight in action every day, and even hosts meetings in San Diego to hear from customers.

“I give the founders a lot of credit; they had the vision,” Schofield said. “Ultimately I just took it to a whole other level.”