When you typically think of an expansion, you think of adding more offices, a new wing, or a building. However, eBioscience -- with help from the Olpin Group and mobile storage racking systems -- was able to nearly double the amount of usable space without adding a single square foot during a laboratory new expansion and remodel.

eBioscience is a multinational company that specializes in providing scientific researchers and clinicians with chemical and biological reagents. Hence, eBioscience has unique storage needs. Their main focus was a complete overhaul of the cold room, which has to be kept at 35 degrees in order to properly store the temperature-sensitive materials. Wire frame shelving had been used throughout the original cold room, making it difficult to organize and find the necessary items. 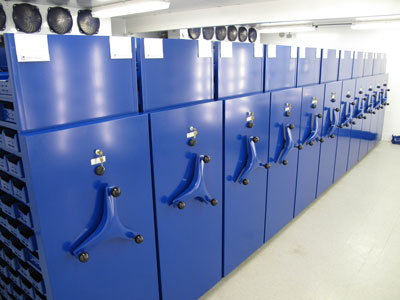 Olpin Group removed the majority of the shelving and installed mobile storage racking systems in order to maximize space and improve access to inventory which could then be neatly organized. Some wire frame shelving was left at the entrance to hold products going in or out of the mobile storage racking systems. The storage capacity was increased while the total space required was reduced by more than half.

In addition to the mobile storage racking systems in the cold room, improvements were made in other areas including rows of shelving to organize sales literature, a re-organization of the shipping room for quick access to packing supplies, and an updated product staging area for more efficient deliveries. Each solution was custom designed for each area and its appropriate functions.

Thomas Braden, VP of Global Operations at eBioscience, stated that "Olpin Group was under budget, and helped us to achieve the results needed within a very defined timeline. The guys were fantastic to work with and we are totally satisfied with the project."