Unmanned aircraft take over as robo-fighters, watchdogs and spies

By PADMA NAGAPPAN, Special to The Daily Transcript
Tuesday, January 25, 2011

Think about unmanned aerial vehicles (UAV) and the picture that probably comes to mind is of the remote-controlled drones that have been in the news recently for conducting air strikes in the remote regions of Pakistan that border Afghanistan.

But while UAVs were primarily designed for military use and are a key component of U.S. strategy for intelligence, surveillance and reconnaissance (ISR) in the Iraq and Afghan wars, they are used closer to home for other purposes as well, such as border patrol and disaster relief.

San Diego is home to two major companies involved in the design, development and manufacturing of unmanned aircraft.

Northrop Grumman’s flagship UAV is the Global Hawk, a high-altitude long endurance, or HALE, aircraft, which has autonomous control and is jet-powered. Projected revenues from sales of all unmanned aircraft systems are about $17 billion. Northrop’s Rancho Bernardo location focuses on design, development and testing.

General Atomics’ well-known UAV is the Predator, a medium-altitude long endurance, or MALE, aircraft, which has propellers. The Predator drones were the primary UAVs used by the CIA and the U.S. Air Force to target militants in tribal Pakistan. They are built in Poway.

The Predator was designed to carry cameras and sensors, but has been modified to carry weapons like the Hellfire missile. The Global Hawk is capable of carrying weapons but has not been equipped to do so. 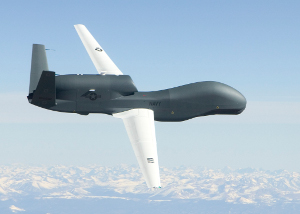 The Northrop Grumman RQ-4 Block 10 Global Hawk flies at altitudes up to 65,000 feet for up to 35 hours at speeds approaching 340 knots, and can image an area the size of the state of Illinois in just one mission. Photo courtesy Northrop Grumman

Both companies have several other unmanned aircraft in their arsenal. The U.S. Army and Navy also deploy various UAVs.

Their surveillance capabilities allow UAVs to be adapted for a variety of uses. Here in San Diego, the Global Hawk was deployed to conduct aerial surveys during the wild fires of 2007.

It was also used in response to the Haiti earthquake, when it remained overhead for hours, giving relief forces information about which roads and bridges were down and which ones were operable.

For example, “The remote crew of the Global Hawk noticed that an airplane with food and water supplies was unable to land, so they alerted authorities,” said Jim Zortman, vice president of lifecycle logistics and support with Northrop Grumman Aerospace Systems.

The Hawk can fly up to altitudes of 65,000 feet and stay in the air from 24 hours to 48 hours at a stretch, which allows it to cover large swaths of the country, Zortman said, explaining how much data it can gather in a single mission.

“Its main advantage is that it flies high and has long range. So it does not have to be parked close by. A Hawk stationed in Sacramento flew to South America, so distance is not an issue,” said Zortman, who was formerly a commander of the Naval Air Forces, Pacific Fleet and held the rank of vice admiral at retirement in 2007.

During take-off and landing, the Hawk is controlled by a local ground station called the launch and recover element. Once airborne, it is controlled via satellite by mission control, located in Beale Air Force Base in California. So a Hawk flying reconnaissance missions in Afghanistan can actually be controlled by pilots stationed in Marysville, Calif.

Unmanned aircraft are also used for scientific research -- they can fly directly into hurricanes, track them, predict the path and convey near real-time data that serves as advance warning. Northrop Grumman conducts joint operations with NASA to gather climate related data.

UAVs are also used for geophysical surveys, in oil, gas and mineral exploration and production. Remote sensing is another capability, by equipping them with a variety of sensors, including biological sensors capable of detecting the airborne presence of microorganisms.

They are also utilized more and more in search and rescue missions, such as during the 2008 hurricanes that struck Louisiana and Texas.

In the last 60 years, Northrop Grumman, one of the largest defense contractors in the world, has delivered more than 100,000 unmanned aircraft systems to various buyers including its primary customer, the U.S. Air Force.

Aside from the Hawk, its local facility is involved in the development of the Bat, Fire Scout and the X-47B Unmanned Combat Air System (UCAS), among others.

Slightly less than half of Northrop’s 4,000 employees in San Diego work on aerospace projects.

“We build the fuselage in Mississippi, the tail in West Virginia, wings in Texas, and then they are shipped to Palmdale and assembled,” Zortman said, describing the complex assembly process that starts with design in San Diego and culminates in Palmdale, 60 miles north east of Los Angeles.

Northrop has also sold Hawks to the German Air Force, which installed its own customized sensors, radars and communication equipment. NATO is interested in the UAV and is currently negotiating with the company.

Zortman said the cost of each unmanned aircraft varies, depending on the type of mission it is designed for and how it is equipped: “The more equipment you put in it, the more it costs.”

General Atomics declined to be interviewed for this report. According to media reports, while other drone manufacturers rely heavily on suppliers for aircraft parts, General Atomics’ aeronautical unit builds its planes from scratch. The company has built about 400 unmanned aircraft, ranging in price from $4 million to $15 million.

When it comes to tracing how San Diego became a hub for unmanned aircraft, all roads lead back to Ryan Aeronautical Co., which was founded by T. Claude Ryan in San Diego in 1934.

Ryan is best known for founding Ryan Airlines in 1925 and being associated with Charles Lindbergh’s Spirit of St. Louis transatlantic plane.

During the post-war years, Ryan Aeronautical diversified and became involved in the missile and unmanned aircraft fields. It developed the Ryan Firebee, an unmanned target drone, and the Ryan Firebird, the first air-to-air missile, during the 1950s.

Ryan also built several historically and technically significant aircraft, but its most successful production aircraft was the Firebee.

In the early days, UAVs were used mainly as aerial practice targets.

In 1968 Ryan was acquired by Teledyne for $128 million and a year later became a wholly owned subsidiary, known as Teledyne Ryan. Ryan retired as chairman.

Northrop Grumman purchased Teledyne Ryan in 1999, with the products continuing to form the core of that firm's unmanned aerial vehicle efforts.

Zortman said the Global Hawk started out as a DARPA (Defense Advanced Research Projects Agency) project, when Ryan landed a contract with the Department of Defense.

“Since then, the design has been refined and matured. Today’s Hawk is similar in shape, but has subtle differences,” Zortman said.

“Ryan is a very big part (of San Diego becoming a hub for UAVs). We were able to take what they were doing and build on that. There aren’t many places in the world with as much knowledge (in UAVs) as Ryan’s engineers. Maybe Israel, which is advanced in the unmanned business because of its security needs,” Zortman said.

General Atomics entered the fray from a different angle. In 1994, the Pentagon awarded a contract to the fairly new company, to develop a different type of unmanned aircraft. The idea was to build a more robust version of a drone developed in the 1980s by a former Israeli aircraft designer. The result was the Predator, which has become a mainstay of U.S. military forces in recent years.

The Predator’s role has grown from CIA and U.S. Air Force use to include the Navy and Army. Since 2005, the Predator has been used to patrol the U.S. border. About 25 drones have been sold to various NATO countries.

Modifying existing models of aircraft leads to different types of unmanned systems. Zortman said Northrop recently modified a manned helicopter into an unmanned system, since the military wanted a chopper that could carry a heavier load.

The company also has a contract with the U.S. Navy to design and build two unmanned aircraft without vertical tails that can land on an aircraft carrier. Once accomplished, this will be a significant step in enabling stealth planes to be brought on board aircraft carriers.

The Defense Department plans to make significant investments in unmanned aircrafts. Northrop Grumman said analysts estimate the DoD will spend about $73 billion in the next few years on UAVs.

“Budget cuts have been proposed, but not finalized. We will continue to invest in unmanned systems. So far, the Department of Defense has found us useful,” Zortman said.