From farm boy to CEO to entrepreneur hall of famer

By PADMA NAGAPPAN, Special to The Daily Transcript
Thursday, February 24, 2011

He founded Titan Corp., a defense and technology company that had revenues of $2.5 billion when it was acquired by L-3 Communications in 2005. He will be inducted into CONNECT’s Entrepreneur Hall of Fame in March, where he will join the ranks of Irwin Jacobs, founder of Qualcomm, and J. Robert Beyster, SAIC founder.

But systems technology mastermind Gene W. Ray traces his roots back to a farm near Murray, Ky., where his family raised corn, tobacco and dairy cattle.

“I was driving a tractor when I was 8 years old,” Ray said. “I milked the cows and fed them before school, did more chores after school and during the summer.”

As he grew older, he decided farming was too much hard work. He wanted to be a baseball announcer, but discovered he loved physics and majored in it at Murray State University. He went on to receive his Ph.D. from the University of Tennessee.

He moved out west to San Bernardino when Aerospace Corp. offered him a job in weapon systems analysis. Then a job lead he came across by chance took him back east to the Pentagon. 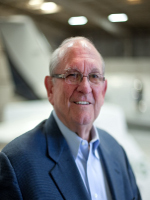 “I was in the Xerox room at Aerospace and saw an ad that said the Pentagon was looking for young Ph.D.s. I was hired to manage the strategic division. I was very, very lucky to get that job,” said Ray, who was 29 years old at the time.

Back then, Robert McNamara, the former president of Ford Motor Co. (NYSE: F), was the Secretary of Defense and had hired a lot of young Ph.D.s who were known as “McNamara’s whiz kids.” Ray said the Air Force hired people like him to “counter” those whiz kids.

He and his peers advised the military on strategy and tactics, backing their recommendations with analytical reports. Ray recalled performing a detailed study on how B-52 bombers ought to be deployed in Vietnam.

It was a huge leap for him, from Aerospace to the Air Force. He had never met anyone above a captain’s rank, but at the Pentagon, he was the civilian equivalent of a two-star general, he said.

A few years later, Beyster recruited him as vice president of the newly formed SAIC (NYSE: SAI), asking Ray to tap his military contacts to bring in business.

“I was employee number 32. Bob mostly hired Ph.D.s and expected everyone to bring in contracts. I learned so much about how to run a business from him,” said Ray, adding, “He was one of my mentors. I’ve had many; I needed a lot of mentoring. They helped me make fewer mistakes.”

Ray spent 11 years at SAIC and counts building up the systems division as his biggest contribution. It had 500 employees when he moved on in 1981.

Explaining his departure, Ray said, “Bob and I had a disagreement and Bob won. So I left. He mentions this in his book.”

While he didn’t poach executives from his former employer, he said he let it be known that people could contact him if they wanted to join Titan, and many did. Asked how that flew with Beyster, he said, “Not well.”

The two have since reconciled, and Ray said he expects Beyster to attend the hall of fame induction ceremony next month, health permitting.

Titan had a good start, for which Ray credits the early Reagan years, when the former president focused on building up defense.

The company grossed $25 million by the third year and was getting ready to go public in 1984, when it merged with a cash-rich $95 million Los Angeles company, Electronic Memories & Magnetics. The bigger company did not have a CEO, so Ray became the head of the new Titan Corp.

“This was a small fish swallowing a big fish, and we had indigestion,” he laughed.

Much of its early growth came from defense, until it hit a plateau after reaching $150 million in sales. Ray referred to the fall of the Berlin Wall as a milestone impacting defense contractors, when the military’s budget was cut in half.

That’s when he and his team decided to diversify, taking technologies they had developed for the military and applying them to the commercial market.

One of those was electron beam machines, which in the early years were used to sterilize medical products. Titan spun it off as a separate company, SureBeam, with the goal of pasteurizing food.

At one time, nearly 75 percent of U.S ground beef producers contracted with SureBeam.

While the machines did not use radioactive material, the government insisted the company label packaged meat as having been irradiated, according to Ray.

“That turned people off and SureBeam went down the tube,” he said.

In the weeks following 9/11, during the anthrax scare, Titan found that the electron beam machines killed anthrax as well as bacteria. The White House asked the company to treat all of its mail, as well as mail intended for members of Congress.

The mail was shipped from Washington, D.C., to Ohio, where Titan sanitized it and sent it back. The entire process took a week before any mail could be opened by its recipients. Eventually the U.S. Postal Service bought eight sterilization systems in a deal worth $40 million.

During the late 1990s, Titan focused on changing its image from that of a defense company to a technology major.

“In 1999, we managed to convince the market we were a tech company,” Ray said. That year its stock price increased 760 percent, and Titan was named the top performer on the New York Stock Exchange.

It was also one of the first firms to set up in-house incubators to commercialize new technologies.

Ray said the company grew organically and through acquisitions. “From the first billion to $2.5 billion, it was all internal growth. We had some excellent years.”

He described his role as setting the vision, ensuring the firm had the best people and creating an environment where they could be successful. He was hands-off when the going was good and hands-on when problems arose -- a management style he learned from Beyster.

Today, Ray serves on the board of several organizations, including his alma mater, Murray State University, Scripps Cardiology and Scripps Green Hospital. He is also chairman of the board of Decision Sciences, a San Diego startup focused on detecting nuclear materials in shipping containers and other forms of transportation.

He is involved with several other startups as well, and said the technologies that appeal to him include energy storage and defense.

“The No. 1 attraction for me is that there is a need for what they’re doing.”

Ray will receive the Entrepreneur Hall of Fame Award, CONNECT’s highest honor, at a ceremony March 31 at 11:30 a.m. at the Estancia La Jolla.

A well deserved honor for not only a great entrepreneur but also a great person. Congratuations Gene!