By JENNIFER McENTEE, Special to The Daily Transcript
Thursday, March 17, 2011

On a recent weekday morning, 29-year-old Quentin Sponselee had just driven a customer to the San Diego International Airport from the Chopra Center for Wellbeing at the La Costa Resort & Spa in Carlsbad. But he wasn’t behind the wheel of a taxicab, a limousine or a shuttle bus.

For a fare of about $65, the customer traveled in a black, leather-appointed Toyota Prius.

Sponselee is the chief executive officer, co-founder and one of about 30 drivers for Terramoto Transportation Inc. The Sorrento Mesa-based company offers private transportation in Toyota hybrids, including the Prius sedan and Highlander SUV, providing a green alternative to traditional ground transportation.

The service has so far been popular with hotels needing on-call transportation for their guests, as well as with biotechnology and pharmaceutical companies needing executive-class transportation, Sponselee said.

Terramoto uses an online reservation system to dispatch vehicles between the hours of 4 a.m. and midnight. The minimum fare is $20.

“I really try to create the accessibility of a taxi, the price of a shuttle, and the service of a limo,” Sponselee said of Terramoto’s niche. “Corporations are trying to save money. It’s the value proposition. The ‘green’ turbo-charges everything.” 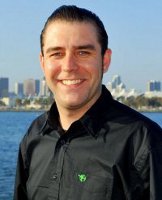 In the interest of reducing its carbon footprint, Terramoto donates a dollar for every trip it makes to the nonprofit Nature Conservancy and its Plant a Billion Trees campaign.

Sponselee was driving town cars for another San Diego ground transportation company when he got the idea for Terramoto. With the help of his high school friend and co-founder Dustin Amelotte, and a car loan co-signed by his girlfriend, Sponselee took the gamble.

“Everybody told me, ‘No one wants to ride in a Prius,’” he said. “What I was betting on was that corporate America doesn’t place too much value on riding in a town car.”

“My vision is to create a consistent level of professionalism for my business that’s going to benefit everyone that comes into contact with us,” Sponselee said.

“It’s hard for me to go to an angel investor and say, ‘I need a half-million dollars to take over the world with a Prius,’” Sponselee said. “To do that, I have to control a sizable portion of the private transportation market.”

The current economy has affected Terramoto’s business, too, although not necessarily adversely. Companies are now more likely to consider less expensive transportation for its executives, he said, making limos and town cars passé. And as the cost of gasoline increases, the decision to create a hybrid vehicle fleet seems a smart one.

“On one end of the spectrum, I hate to see the price of fuel go up,” said Sponselee. “But if we’re having trouble with it, our competitors are having a much tougher time.”

A Prius can get 42 miles per gallon on San Diego city streets and highways, he said.

Sponselee is optimistic that Terramoto could see a million dollars in revenue this fiscal year.

“Being a revenue-based company, and not capitalized, it’s like walking a cliff’s edge,” he said. “I have to check our finances every single morning. It’s a constant dance to improve our services, maintain the vehicles, make ends meet and pay everybody.

If his plans for securing investors and growing the Terramoto business are successful, Sponselee hopes 2011 will be the year he can finally feel at ease.

“It could happen this year. This might be the year when along that cliff’s edge, maybe the path will get a little wider.”

View all comments
User Response
1 UserComments
Patrick Knighton 10:17am May 9, 2011

I have called them for a ride on several occasions and they were consistent with being on time with top quality service. I left items in the car and they were returned before I realized they were missing.