Young district attorney has palpable compassion, in and out of court

By Cameron Leigh James, Special to The Daily Transcript
Tuesday, May 3, 2011

San Diego Deputy District Attorney Dan Link didn’t set out to be, at age 35, the youngest president in the 111-year history of the San Diego County Bar Association. In fact, the political science major wanted to be a doctor until he realized calculus and organic chemistry weren’t his strong suits.

He said he didn’t make the conscious decision to be a lawyer until he was in law school. But when he was 17, before entering college, he wrote a letter to himself with the instruction not to open it until he was 30.

“I abided by that rule and when I opened it at 30, I was surprised to see I’d written ‘At this point in your life you should be a deputy district attorney’,” said Link. “I didn’t know I had the desire back then.”

That insight surprises him still, 10 years into what he hopes will be a long career in the DA’s office.

The San Diego native, who grew up surfing and swimming and played varsity water polo for UCLA, describes himself as loyal, hard working, and a tenacious yet fair prosecutor. He’s been in and out of courtrooms since he was a kid. When his father, San Diego Superior Court Judge Frederic Link, was a defense attorney, Link would visit him at his office. 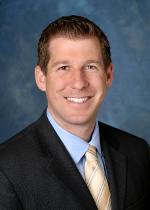 And after his father was elected to the bench in 1990, he’d sit in his father’s courtroom watching trials or arraignments.

“I always admired trial lawyers,” said Link. “There was a part of me that wanted to be in that chair arguing for the people.”

Link, married and a father to one-year-old daughter, Kendall, started his law career in the civil arena, but quickly recognized a desire to help people with immediate needs. And although he was attracted to the trial lawyer aspect, being in the courtroom was more important.

“I felt comfortable speaking in front of people, relaying my thoughts to juries, and that translated into becoming a strong, persuasive speaker later in my career,” he said.

After three years as a DDA, Link knew he wanted to be in the unit that handled cases involving the most intensive crimes against victims. As a trial lawyer in the Family Protection Unit, he prosecuted cases involving child and elder abuse, molestation, and domestic violence crimes. He has tried more than 90 cases, 60 in front of a jury, and 30 of which were felony trials.

His compassion for crime victims is palpable.

“While I can’t always fix their problems, or make them whole again, I can let them know people care and are willing to listen and show them the attention they need to help them get through this terrible process so the healing can begin,” said Link. “Watching my victims go through what they have to go through, and hope to God I never have to endure, and seeing them come though it with a smile on their face and faith in society is extremely inspirational.”

Link is combining his talent for connecting with victims and relationships he’s cultivated over the years to get things done for San Diego’s legal community. As President of the SDCBA he intends to strengthen the association’s 100+ programs. With help from a talented, diverse 19-member board, he said his primary goal is to get the association’s 10,000 members out of their offices and return to the basics – connecting with each other, their clients and the judiciary, and participating in community service events for the betterment of the community and the profession. And that’s where he believes he can make a difference.

“The people I respect most in this profession have a personal touch, the ability to reach out to a client or victim and make them feel comfortable about the system they’re about to enter,” he said.

Link brings that personal touch to community service projects. He has spearheaded efforts to match local law firms with crime victim families in conjunction with the Adopt a Family for the Holidays program sponsored by the DA’s office. With fellow SDCBA members, he participates in one or two Habitat for Humanity builds each year, as well as Face Lift, which beautifies downtrodden neighborhoods block by block, one house at a time. He’s also involved with Project Lead, a program through the DA’s office that educates inner city fifth graders about the consequences of peer pressure and provides practical solutions to help them not give in to it.

“I’ve always been driven to promote as much community service as possible and at the highest level. When you’re a government employee, prosecuting every day is like community service because you’re helping people,” he said.

The seed to be successful and serve others was planted by Link’s parents.

“They always encouraged me to do good, to do better, to never be satisfied with what you’re doing now and to always try to better yourself and others,” he said.

Although his parents gave him the foundation and the moral compass he needed to get where he is today, he said his greatest inspiration comes from his colleagues – the district attorneys, victim’s advocates and paralegals, and the victims themselves.

“Not a day goes by that I’m not in awe of the people I work with, and that’s not a tag line,” said Link. “It’s a beautiful place to work; it’s something very special.”