By Doug Sherwin, The Daily Transcript
Tuesday, May 3, 2011

Kevin Cole is scheduled to step down this spring as dean of the University of San Diego School of Law, and he’s leaving some big shoes to fill.

Cole, who decided he wants to return to teaching, has overseen the school’s growth in offerings and quality programs since taking over as dean in 2005, and he has positioned USD for future success.

“We admitted, statistically, the strongest class in the school in the fall, and that’s exciting,” he said.

The school recently added resources to its mock trial and moot court teams, including the addition of an assistant U.S. attorney and a veteran appellate attorney to the coaching staff. The moves have already paid off, as USD teams have recorded some impressive results this year. 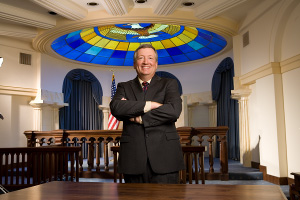 And USD’s Jamie Altman and Andrew Minear won “Best Brief” at this year’s Duberstein Moot Court Competition at St. John’s University School of Law in Queens, N.Y. More than 50 law school teams were competing. It’s the highest ever brief-writing finish for any team from USD.

“We’ve always tried to ramp up opportunities for students to blend their rigorous classroom instruction with high quality, practical instruction,” Cole said. “I think those things are very important on a going forward basis, because the legal market is going to want to have people sophisticated in lots of different ways. They want you to do analytical work and also the sort of practical interfacing with clients and talking to juries.”

The school’s new Technology Entrepreneurship Law Clinic, which it offers in partnership with the nonprofit technology trade group Connect, has taken off as well.

“That’s been a real good addition to our programming,” Cole said. “It’s great to be exposed to work at that level.”

The school’s San Diego Journal of Climate and Energy Law has increased its profile in recent years, and the Center for Intellectual Property Law and Markets also has been “a boon,” according to Cole, as workers in the biotech industry are taking part-time courses to get their law degree.

“It’s nice to see the progress we’ve been able to make at the school,” Cole said. “I think we’ve done a lot to bolster student services and it’s been a real treat to accomplish that.”