By Doug Sherwin, The Daily Transcript
Tuesday, May 3, 2011

In Steven Smith’s 15 years as California Western School of Law’s dean, the school has successfully teamed up with area universities, expanding the educational opportunities for its students.

One of the most notable collaborations is with the University of California, San Diego. The two schools offer a Health Law Masters Degree, a joint degree designed to prepare students with an understanding of the areas where healthcare and law overlap. California Western also offers several dual-degree programs with San Diego State University, including courses for social work, business administration and a doctorate program that combines law and history for a career in academics.

“There’s always room for improvement, but in terms of encouraging (students) to be well prepared for their profession and find satisfying careers, I think we’ve made great progress,” Smith said. California Western officials have been engaged in active discussions with UCSD since January 2010 about joining together to form a new law school. But the talks were recently put on hold because of California’s ongoing budget crisis and the implications it could have on education.

Both sides, however, still hope something can be worked out eventually.

While its partnerships have been valuable, California Western also features several novel programs of its own. 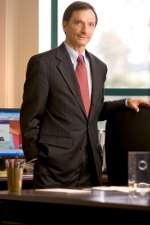 The centerpiece is the STEPPS (Skills Training for Ethical and Preventative Practice and career Satisfaction) program. In its third year, the program combines legal writing, professional responsibility, problem solving, enhancement of career satisfaction and other lawyering skills.

“We make a real effort at interdisciplinary work,” Smith said. “We try to create a sense of community here, making sure they have a sense of professionalism and caring.”

California Western has a strong track record for its graduates entering the legal profession. The school has an 89 percent placement rate within nine months of graduation.

In addition to its interdisciplinary approach, school officials try to impart a sense of public service with its students.

The school has a summer program in Santiago, Chile, where participants will learn about Latin America’s efforts at human rights reform through litigation.

California Western also has a number of programs with other schools in London and Galway, Ireland.

“This is a great time for law students and the commitment they have,” Smith said. “Their ideas, their sense of professionalism and commitment to clients.

“If you talk to them about their future, it is much more idealistic. They’re wanting to help people and use the law to help what the country does. It’s a real sense of justice. There’s a lot of pro bono work out there that students are doing.”

Smith said California Western is trying to produce active and engaged students that do interdisciplinary work and have outstanding written and oral communications.

“And that they’ve reflected on – and are seeking – the right place in the profession where they can have satisfying careers,” he added.