By Jennifer McEntee, Special to The Daily Transcript
Thursday, June 9, 2011

As co-founder and president of Vista-based E-World Recyclers, Cindy Erie gives a second life to obsolete electronics that would otherwise be relegated to the trash.

Some electronics can be wiped of a previous user’s data and refurbished. Others are dismantled, piece by piece, and sold in bulk as bits of plastic, glass and metals.

“It’s not a glamorous job. It’s very labor intensive,” said Erie. “The rewards come in knowing that we’re doing something good that’s not leaving a wasteful mark on this world.”

Erie was nominated for the award by the North San Diego Small Business Development Center at Mira Costa College. Erie sought help from the center to launch the E-World Recyclers business in 2006. 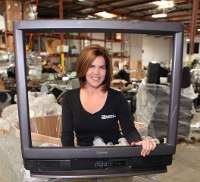 “We spent a lot of hours at their office,” she said. “We wanted to have a really tight business plan. We spent time with their staff and took some courses. We came out with some great guidance, and it really did assist us with developing a great business plan that guides our operations today.

“We were able to hit the ground running, and we haven’t stopped yet," Erie added.

Sudershan Shaunak, director for the North San Diego Small Business Development Center, said the nomination was based on criteria including the company’s positive impact on the local economy and job market.

“They’re the kind of people that when we give them business advice, they act on it,” said Shaunak. “Cindy is a very motivated leader and she definitely has had a lot of hands-on experience within the industry.”

Erie and her husband, Bob, began a computer refurbishment business in their garage a decade ago. It was there that they first realized there was a market for electronics recycling.

“We were having problems getting stuff recycled, particularly the plastic monitors. There wasn’t a market for it,” Erie explained. When she contacted traditional recyclers to see if they would accept computer components they no longer needed, “They turned us away. At that time, 10 years ago, everything was going in a Dumpster,” she said.

As technology evolved, state regulators took notice and implemented far-reaching computer recycling mandates designed to reduce the use of certain hazardous substances in electronics. California’s laws are considered among the most stringent, in part because they require that some of the recycling cost be passed along to consumers when they buy new electronics.

The Eries created E-World Recyclers when their partners in a previous Vista-based business, Computer Recyclers of America, moved its operations to Fresno, Calif. There are only a few San Diego companies specializing in electronic waste, Erie said, so there’s a significant local demand.

E-World Recyclers’ clients are from throughout San Diego, Orange County, Riverside and Los Angeles counties, and into Nevada and Texas. The company receives and processes e-waste for residential customers, corporate accounts, and even environmental services organizations.

Erie said many of their customers have ongoing recycling needs, especially among companies that require the most upgraded electronics available on the market.

E-World Recyclers employs 20 people in its warehouse, and nine people in its office. Technology is at work in the 46,000-square-foot facility, processing CRT tubes, video-recording the destruction process, and gnashing hard-drives with industrial-size shredders.

“It’s like a paper shredder, but on a much larger scale,” Erie said. “It takes stronger teeth to plow through aluminum.”

E-World Recyclers’ progress in streamlining the recycling process has made it a model in the industry, Erie said.

“We’re constantly trying to be innovative and create better ways of handling and processing the materials,” she said.

Erie said she’s privileged to work in an industry that benefits the environment, but that other San Diego companies can be environmentally conscious, too, by doing business with other companies in the region.

“We all locally have that kind of opportunity -- we can help our local environment by keeping business within our community, rather than outsourcing to other states and countries,” said Erie. “It’s unbelievable how much manufacturing goes on here. There’s so much value here. Let’s build each other up.”