BOSTON -- Complacency rarely pays. It's a lesson many investors have learned the hard way so, heading into a summer when volatility is back in the market, they'll be watching closely.

Three months ago, everything seemed to be in place for another quarter of strong mutual fund returns. The economic recovery appeared to be on track and unemployment was edging downward. The stock market had risen for three consecutive quarters, and seven of the last eight, dating to the start of the bull market in March 2009.

But momentum has shifted. Stock funds posted an average loss of 0.4 percent in the second quarter, according to fund tracker Lipper.

That small decline came as the economic recovery began to stall. A spate of disappointing reports about manufacturing, hiring and housing sent economists scrambling to scale back their already-modest growth projections for the year.

Stocks were choppy: The Standard & Poor's 500 index rose nearly 3 percent in April, then went on a seven-week losing streak that ended in mid-June, and sent the index down 7 percent. The market regained some of that ground to ultimately finish, essentially flat, down 0.4 percent.

“I can see a choppy summer,” Lipper fund analyst Tom Roseen says. “Volatility is in the market now, and people are taking a little bit more defensive stance.”

Some of the first quarter's top-performing funds fell to the back of the pack. Natural resources funds that specialize in oil and mining stocks lost an average 5.6 percent in the second quarter. Those stocks tend to move more closely in sync with the economy than most, as their profits are linked to demand for commodities.

When the recovery appeared solid in the first quarter, natural resources funds returned an average 14 percent, best among the sector fund categories that Lipper tracks. Industrial funds are another group that enjoyed strong first-quarter performance (up nearly 7 percent) because the economy was growing at a steady clip. In the second quarter, those funds lost an average 1.7 percent.

Funds investing in stocks that tend to be stable performers in both rising and falling markets have lagged during much of the market's steady climb. But many of those defensive stocks posted strong second-quarter gains. That helped funds that specialize in U.S. health care and biotechnology stocks post an average 6.7 percent return. Funds that invest in health care and biotech globally were the top performers among all sector funds, with a 7.3 percent average return.

Utilities stocks, which tend to see steady demand in good times and bad, also had a strong quarter. Funds specializing in those stocks returned an average 3.4 percent. 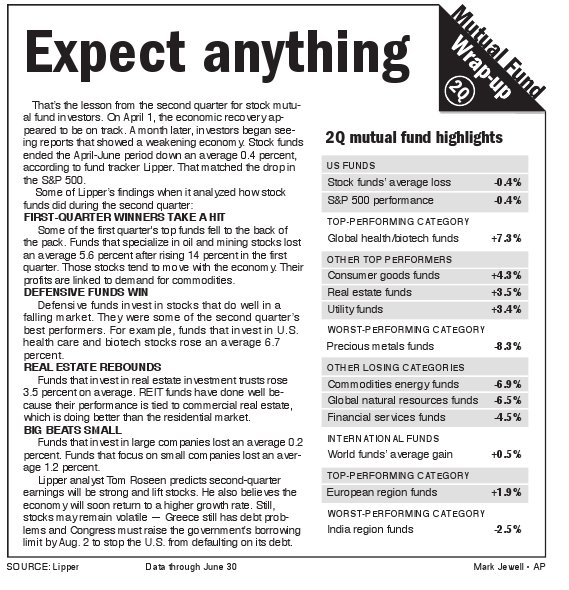 Funds that invest in real estate investment trusts _ companies that own and often operate income-producing properties _ returned 3.5 percent on average. REIT funds have fared well lately because their performance is closely tied to the commercial real estate market, which is in better shape than the residential market. REITs also have been popular with investors recently because they're required to pay dividends. That's especially appealing to retirees needing regular income.

“The defensive stocks, and the income payers, tended to protect investors from losses in the quarter,” Lipper's Roseen says.

Funds that specialize in stocks of banks and other financial services companies lost an average 4.5 percent. Those stocks were hurt by the slowdown in the economic recovery, increasingly strict financial regulations, and fears that a Greek debt default could hurt European and U.S. banks alike. One of the big losers was American International Group, the insurer that received the largest federal bailout coming out of the financial crisis. Its stock tumbled nearly 17 percent in the quarter.

Funds that invest in stocks of large companies lost an average 0.2 percent. That's better than the average 1.2 percent loss for funds focusing on small company stocks, known as small-caps.

Lipper's Roseen predicts upcoming second-quarter earnings reports will be strong, and lift stock prices. He also believes the economic recovery has merely hit a soft patch, and will soon return to a stronger growth rate. Gross domestic product -- the economy's total output of goods and services -- grew at a 1.9 percent annual rate during the first three months of the year. Historically, growth has averaged about 3 percent.

Nevertheless, Roseen predicts stocks will continue on their recent volatile course. He points to an abundance of reasons to be cautious: The risk of a Greek default hasn't disappeared. Congress will spend the next few weeks trying to reach an agreement to raise the government's borrowing limit by an Aug. 2 deadline to avoid a first-ever government default. And financial markets are adjusting to the June 30 end of the Federal Reserve stimulus program known as QE2, or quantitative easing, round two. The Fed bought $600 billion in Treasury bonds in an eight-month program to encourage investors to buy higher-yielding investments, such as stocks and corporate bonds.

Now, the biggest buyer of Treasurys is shifting to a new role -- eventually, it will sell those bonds back to the market. It's a change that will make many investors more risk-averse than usual, Roseen says.