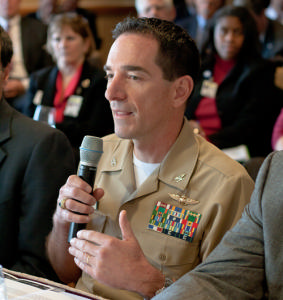 The U.S. military prides itself on being both the most technologically advanced fighting force on earth, as well as the quickest to respond to any emergency. Unfortunately, those two concepts don't always mesh.

Getting a product to soldiers and sailors as quickly as possible is known in the military as rapid fielding, but "rapid" in this context doesn't mean what it often does in the rest of the world. While technology is changing every few months, regulatory hoops and other issues can mean that new software can take years to be installed on a Naval ship, by which time it's practically outdated.

To solve this problem, Rear Adm. Patrick Brady, commander of SPAWAR, said that the military needs to look at its acquisitions process to create what he called a "left-hand lane" to speed up the acquisition and deployment of certain technologies.

"For this high priority issuing, this left-hand lane, you follow this new, faster set of rules," Brady explained. "Maybe you're addressing things by ship class, or by individual ships, that let you go through that."

Brady was speaking earlier this year at a Daily Transcript roundtable, co-hosted by the San Diego chapter of the National Defense Industry Association, which brought together local Navy leaders, and representatives from defense contractors.

Brady said that the Navy wants to incorporate a faster way to get tools into the hands of its soldiers, but it must sort out the rules. Who, for example, would decide which products are fast tracked? Organizations such as the U.S. Cyber Command, a subordinate to the branch-wide U.S. Strategic Command, prioritizes which software systems must be replaced with more advanced versions, but choosing which advanced version goes into effect is a different matter.

Brady said this responsibility would likely fall to the commander of the Tenth Fleet, which since its founding in World War II, has been on the Navy's cutting edge.

Leaders from the defense industry said they noticed some areas of the military's acquisition process that could be altered to make it easier to get high-tech products onto ships and bases quicker. Dennis Bauman, an independent consultant who spent 30 years in the government's senior executive service, said that the Department of Defense uses the same acquisition process for hardware as software, and they're really different products.

"We in the acquisition field in the DOD have DOD Instruction 5,000, that series of acquisition regulations which many of you in this room know very well, and it's a one size fits all set of statute, regulation policy," Bauman said. "After years of treating a radio program like a ship building program in terms of what you have to do inside the building to move forward with it, I've become convinced that we need a different DOD 5,000 for C4I (Command, Control, Communications, Computers and Intelligence) than we have for many of the other weapons systems."

Industry leaders said they would also like to see more communication between the military and the private sector over what, exactly, is needed. Duane Roth, chief executive officer of the trade group Connect, said that San Diego is a leader in finding ways to rapidly mine large amounts of data and find the information needed to make decisions, for example, but often private sector companies aren't sure how to get a contract with the department of defense.

"We don't know your vocabulary, we just don't. We don't understand how to do business with you," Roth told Naval leaders. "But we have solutions. And vice versa, you have things that we'd very much like to bring into the commercial world, but we don't know what those are."

Capt. Joe Beel, commander of SPAWAR Systems Center Pacific, said that he would like to see more programs that bring sailors directly into laboratories, so they can tell researchers what kinds of tools they need. This could also lead to more rapid fielding, and needs would be more directly met.

As the military borrows more and more from the private sector, where platforms such as the one used by Apple on its iPhone are becoming more commonly adapted, rapid fielding should increase. Under that platform, it's easier to plug new applications into an existing hardware system, rather than replacing the whole system when there is a need for a new program. Both Navy and industry leaders pointed to the Consolidate Afloat Networks and Enterprise Services program (CANES), a system used on many ships, as successful example of this.

This requires long-term planning, as platforms need to have the memory capabilities to host the systems of the future. Long-term planning in the military is difficult because budgets change yearly and are subject to political necessities.

Roth, however, said that he felt like the niches San Diego's technology companies have become known for, such as wireless and data mining solutions, are a great fit for the military's needs, and the more collaboration the better.

"If there was ever a living laboratory in this country, it's here," he said.