Due to low development costs, there hasn’t been a better time in recent years for experienced developers to build new hotels. Interest rates are also some of the lowest in recent memory, but a sluggish economy coupled with cautious lenders has some hospitality projects waiting on the sidelines.

“It makes sense to develop when costs are low,” said Robert Olson, president and CEO of Irvine, Calif.-based R.D. Olson. “It is more difficult to get financing. It’s almost non-existent.”

Olson gathered a group of undisclosed investors to finance construction of a $25 million Courtyard by Marriott in Oceanside. The 79,000-square-foot, four-story hotel in the Ocean Ranch business park broke ground last November. Features and amenities include semi-enclosed media pods with flat screen TVs and interactive Go boards, a bistro, fitness room, spa and outdoor pool. The 140-room hotel will cater to business travelers.

When it opens mid-November, Marriott International (NYSE: MAR) will manage the hotel, while R.D. Olson retains ownership. This is the second Oceanside Marriott developed by R.D. Olson. The first, a Marriott Residence Inn, opened in 2007.

A rendering of the new Courtyard by Marriott in Oceanside, a 140-room business hotel set to open its doors this November. Photo courtesy of R.D. Olson Development

“We like the brand and the market,” said Olson. “There’s good demand there.”

Oceanside Economic and Community Development Director Jane McVey said, “The proof is in the pudding with R.D. Olson. He’s accomplished, and he knows the lay of the land so that learning curve is handled.”

According to McVey, the city is negotiating with Olson to develop a hotel on a city-owned parcel. Olson confirmed, but both he and McVey said it was too early in the process to discuss further.

Last year in August, Oceanside’s City Council approved a proposal allowing Shantu Patel to develop a 127-unit Hyatt Place hotel, a 3,000-square-foot restaurant and 24 condominiums on a 2.8-acre bluff overlooking Oceanside Harbor. The plan allows Patel to demolish the Roadway Inn (formerly Guesthouse Inn) and the Flying Bridge restaurant located on North Coast Highway to build the new project; however, Patel said he is not moving forward because he hasn’t been able to secure financing. 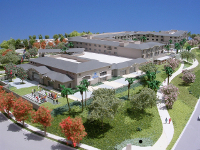 With 800 feet of ocean frontage, the new Hilton Carlsbad Oceanfront Resort & Spa will be a destination for weddings in addition to leisure and business. Image courtesy Wave Crest Hotels & Resorts

His isn’t the only approved project sidelined due to lack of financing.

In June of 2009, the city approved a $209 million 384-unit Oceanside Beach Resort proposed by S.D. Malkin Properties of San Diego, but the developer hasn’t been able to get financing.

“It’s the nature of the market now,” said McVey. “We are working with them on a different proposal to scale it back.”

The original plan allowed a 289-room four-star hotel and spa, 48 timeshares, a 47-room boutique hotel and 22,000 square feet of commercial space to be built on two city-owned blocks near the Oceanside Municipal Pier.

“Many projects are going up now that are not quite as big,” said McVey. “Scaling it back makes it more feasible to get financing while still being a destination resort with quality architecture, fixtures and features. A scaled back resort will have about 310 units.”

The city would redo its disposition agreement as well, which would change the city’s $27.6 million investment.

“Under the new development, that is up in the air,” said McVey. “We’re trying to identify different ways to bring that to fruition.”

Financing was not an issue for San Francisco-based ABA Development, LLC, which broke ground on the Hyatt Place Vista in January: The firm put up approximately $20 million in cash according to Co-Founder and CEO Scott Brown. The 150-room select service hotel is located at Melrose Drive adjacent to the new business park at Faraday Avenue. Currently in the framing stage, it’s scheduled to open May 1, 2012 and will be managed by Rim Hospitality. Features include an outdoor pool, full bar, 1,200 square-feet of meeting space and 24-hour dining. Room rates will average $149 a night, according to Brown.

In January, Encinitas-based Wave Crest Hotels & Resorts broke ground on a 215-room Hilton Carlsbad Oceanfront Resort & Spa. The resort is the first project in the Carlsbad’s Ponto Beachfront Village Vision Plan, which was adopted by the City Council in 2007 for developing the Ponto area of southwestern Carlsbad.

Wave Crest has developed three other projects in Carlsbad: the Tamarack Beach Resort in 1985; the 161-room Hilton Garden Inn in 2000; and Laguna Point Condominiums in 2006. In spite of this being his fourth hospitality project along the water, CEO of Wave Crest Hotels & Resorts Bill Canepa said he has never been involved in a project like this.

Wave Crest secured $60 million in financing from UBS Realty Investors. Canepa thinks the hotel will come in under $55 million. The resort will open for business June 20, 2012.

“When the economy melted down, we were within six months of getting entitlements,” said Canepa. “We just kept moving ahead. It’s one of the advantages of being experienced. This is a terrible setback for the economy, but people are always going to want to have a nice place to go to on the oceanfront. There’s a demand for it. We wouldn’t have been able to get the financing if the lenders hadn’t agreed.”