The athletes not only shared the sports they loved with kids who looked up to them but they showed youth how to play like a real champion. Senior Pastor of the Rock Church and former San Diego Charger, Miles McPherson moderated the panel.

"It's great to see the kids who look up to these athletes learn from them," McPherson said. "Not only about how to play a sport but how to live for Christ." 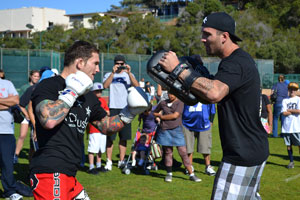 The athletes may come from different fields and walks of life but their motivation was what brought them together on Saturday. Each of them, while being exceptional at what they do, find their strength from something other than themselves. Throughout the day they interacted with the kids and taught them not only sports techniques but also how to live like a true champion and offered advice to the aspiring athletes.

"Stay true to your values," Felix said. "Stay true to the word of God and commit to that. Whatever else takes off or doesn't it's His will."

Felix was among gifted company, and the stories that came out of the event went far beyond learning a few new skills. One teenager had just lost his father that morning. Gonzalez stepped up and consoled the young boy in his time of grief. Another woman roused her entire neighborhood's child population and carted them to the event an hour early to ensure they got the chance to learn from these athletes. The star-struck kids had the time of their life.

Teenage softball player Ashley Bischler got to play catch with three of her favorite Padres.

"My favorite part is being on the field with all the players," Bischler said. "And just enjoying everyone's company."

Professional athletes were not the only ones who made the event memorable. Representatives from almost every PLNU athletic team were involved with hosting the clinics. The baseball team helped with hitting and fielding. The soccer team had several games of pick-up soccer going and helped Novak host the kicking clinic. 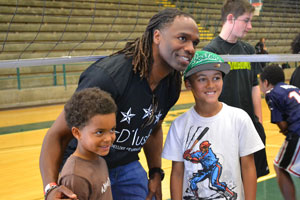 "To see how many kids come out to learn about the game and learn about the Lord too, it's unbelievable," Hundley said. "Great turnout for the baseball team. They're in the middle of their season and they take a day out of their schedule to do that, says a lot about the players and the coaches."

As the sunset glimpsed over the Pacific Ocean and everyone packed up, most things returned to ordinary. Gonzalez, Hundley and Bell will leave for spring training in a week. Stuckey, Brown and Novak will continue to train during their off-season. Lester and Power will prepare for their fights next week. Felix will compete in the summer Olympics. But the effect of this day on their hearts, as well as the hearts of the children there, is something that will stick with them for the rest of their seasons, and for some kids, the rest of their lives, is anything but ordinary.

Dec. 5, 2014 -- George Chamberlin speaks with Dr. Lynn Reaser, chief economist for Point Loma Nazarene University's Fermanian Business & Economic Institute, about how the economy fared in 2014 and what we can all expect to happen in 2015.