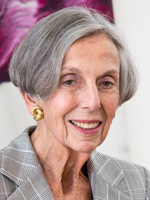 Pauline Foster donated $7.5 million in support of the new cancer care hospital at the UC San Diego Jacobs Medical Center, which will be named “The Pauline and Stanley Foster Hospital for Cancer Care.”

Foster’s husband, Stanley, died of a form of multiple myeloma 13 years ago.

“There was really no center to go to. You tried your luck and unfortunately his luck didn’t hold out,” Pauline Foster said. “I also lost my brother to cancer, and at the time, he needed to be in a hospital. But there weren’t any beds. So after witnessing that, I felt that the best thing I could do would be to make sure that other people had beds and had the opportunity to have the kind of care that would help, and hopefully cure them.”

The Pauline and Stanley Foster Hospital for Cancer Care will encompass three floors of Jacobs Medical Center and will be home to medical staff specially trained in caring for the complex needs of patients with cancer. It will be the only in-patient facility of its kind in San Diego County.

With 108 dedicated beds, the hospital will double UC San Diego Health System’s capacity to treat patients with every form of malignancy.

The Pauline and Stanley Foster Hospital for Cancer Care will complement UC San Diego Moores Cancer Center, the only National Cancer Institute-designated comprehensive cancer center in San Diego, and the capstone of the university’s cancer campus.

Because of their close proximity, the Hospital for Cancer Care and Moores Cancer Center can provide a continuum of services tailored to the needs of patients and their families, including treatment, clinical trials, nutrition, family support and other outpatient programs at Moores Cancer Center.

The Foster family has a history as supporters of UC San Diego programs, including the Shiley Eye Center by establishing the Abraham Ratner Children’s Eye Center and the Ratner Eye Mobile, which were originally funded by Pauline’s mother, Anne Ratner; the Rady School of Management by creating the $5 million Stanley and Pauline Foster Endowed Chair and the Stanley Foster Symposium; and providing fellowship support with a lead gift to the “Invent the Future” campaign, creating the Foster MBA Fellowship Fund with a $2.5 million gift.

She currently serves as a trustee of the Sanford Burnham Medical Research Institute. Foster was declared “Woman of the Year” by the State of California Legislature in 1989 and was given the United Way's Alexis De Tocqueville Award in 1998, to honor her extraordinary leadership and service in the community.