Up on the roof: the newest trend in sustainable building

An interest in and demand for building practices that reduce our impact on the environment is producing an integrated, holistic approach to design that incorporates new technologies and living materials on the fifth façade: the roof top.

Green roof technology originated in Germany some 50 years ago as a means of preventing wildfires. According to Jim Mumford, president of GreenScaped Buildings, a green roof wave came through San Diego in the late 1970s, but waterproofing technology wasn't available here at that time, so many of them failed. Mumford said perfected technology didn't come back across the Atlantic until about 12 years ago. Around the time this second wave took hold, the construction industry tanked.

Using improved technology, Mumford installed the county's first green roof in 2007 at his Good Earth Plants facility. Roofs were retrofitted on three buildings and are now green roof test sites. Mumford said sedums, low-growing species commonly used to vegetate green roofs, don't do well in our climate. Native species are also challenging -- only about a third of those planted at the test site have done well. 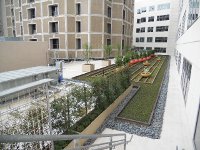 There are two main categories of green roofs. Extensive green roofs are lightweight systems of drought tolerant self-seeding vegetation with soil depths less than 5 inches. Once established, they require little or no irrigation, fertilizer or maintenance.

"The intent is to turn it loose and have minimal maintenance," said Mumford. "But it doesn't rain enough here. We have to irrigate year round because there's no water retention in 4 inches of soil."

Extensive green roofs can be retrofitted onto existing structures to accommodate the additional weight, but Southern California roofs aren't typically engineered to bear heavy loads, and green roof retrofitting can be expensive.

"If you're designing for a green roof from the get-go, the extra cost is minimal," said Mumford.

Intensive green roofs are elaborately designed roof gardens intended for use and engineered to conform to load requirements. They're installed on relatively flat surfaces with a soil depth of 8 to 12 inches, or as much as 15 feet, depending on load capacity, architectural features and budget. Additional layers like protection boards, water retention mats and maintenance requirements add to the costs of intensive green roofs, but a recent U.S. Government Services Administration research study determined green roofs increase rooftop longevity by 25 to 60 years, effectively doubling the life of any roof.

Studies by Green Roofs for Healthy Cities revealed that the U.S. green roof market grew by 16.1 percent in 2009 and 30 percent in 2010 in spite of a sluggish economy. Much of this growth occurred in cities like Chicago, New York and Washington, D.C., where public policies support green roofs. An estimated 8 million to 9 million square feet of green roofs were installed last year.

Current research points to positive or healing effects greenscaped roofs, gardens and plants have on the people who work or live in these buildings. Multiple studies show viewing plants and nature significantly reduces stress, aids in faster recovery, reduces the use of pain medication and even shortens hospital stays.

According to Wendy Cohen, director of facilities construction at Palomar Pomerado Hospital, the 1.5-acre green roof teeming with drought tolerant plants is integrated into the building's structural and mechanical performance and stormwater management system. It also increases energy efficiency by reducing the ground reflectance of solar heat gain in the patient tower. The cost of the green roof is about $10 per square foot. Initially it's more expensive than a conventional roof, but a cost analysis determined the hospital would recover the initial cost through energy savings in seven years.

Whether green roofs become a mainstay of San Diego architecture is uncertain. Mumford doubts it will happen without significant public policy support.