In a move that will further delay, if not squash, 20-year-old plans to redevelop the Navy's waterfront headquarters into an upscale mixed-use complex, the California Coastal Commission voted unanimously last week that the proposed project is no longer consistent with its policies for coastline construction.

In 1991, the Coastal Commission approved the Navy's plans for the 12-acre site, which include an office, hotel and retail complex, along with a museum, park and new Navy administration building, because it said the plans were consistent with its California Coastal Management Program.

Last week's decision reversed that finding. The commission found instead that the $1.2 billion proposed plan would affect coastal uses and resources in a way that is "substantially different" from the plan originally proposed by the Navy.

To continue its work on the project, the Navy and its developer, Dealy Development, would have to resubmit new plans to the Coastal Commission for approval. However, the original developer for the project, Manchester Pacific Gateway, and the Coastal Commission are also involved in litigation over whether the commission can dictate what is built on the site because it is federal land. That lawsuit is currently on appeal before the Ninth Circuit Court of Appeals.

A representative for Doug Manchester, the owner of Manchester Pacific Gateway, said he would not comment on the decision. Spokespeople for the Navy and Dealy Development's owner, Perry Dealy, did not return calls seeking comment. 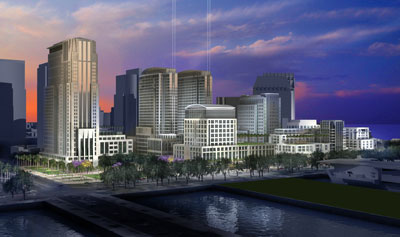 A rendering of Manchester Pacific Gateway

Coastal Commission staff submitted a report late last month stating both the proposed project and the area it would be built in had changed as plans for it moved forward. The only change to the actual project the report cited was reduction of the size of a proposed museum and moving it from a waterfront location to a non-waterfront block.

But staff said the space around the project site and the waterfront have both changed in ways that make the proposed development no longer fit in. Those changes include an increase in residential development along the waterfront, a trend toward placing waterfront buildings further back from Harbor Drive, and "a significantly increasing public awareness of the value of waterfront sites and their land/water connection," according to the staff's report.

The commissioners unanimously agreed with this report and revoked their approval of the project.

"It is unquestionable there have been substantial and significant changes in circumstances, both in the project area as well as in this project," Commissioner Esther Sanchez said.

Coastal Commission staff also cited concerns over whether the Navy Broadway Complex site had been adequately evaluated for seismic activity and terrorist threats.

The Navy announced before Wednesday's Coastal Commission meeting that it would not participate because of ongoing litigation with the Navy Broadway Complex Coalition, a group opposed to the project. However, the Navy submitted statements that said it disagreed with the Coastal Commission staff's findings.

Commissioner Mark Stone called the Navy's lack of participation a "litigation strategy" and dismissed suggestions that the Coastal Commission delay its vote until the Navy was able to participate.

Numerous public speakers attended the meeting to voice their opinions on the proposed project, including representatives from environmental and labor groups, retired Navy servicemen, and local business leaders.

A spokesman read a statement from Congresswoman Susan Davis that said the Navy should build its new headquarters on one of its bases, which would increase security and allow for greater public access to the Broadway site.

Brigette Browning, the president of the local hotel workers union, said stakes were high over the Coastal Commission's decision.

"It's a nonsensical argument to say this is the same project it was 20 years ago," she said.

Browning added that Manchester has "a history of bullying public agencies, bullying workers and bullying anyone who stands in his way."

Larry Blumberg, the executive director of the San Diego Military Advisory Council, referred to an economic impact study released last week that his organization commissioned. The report found that if the project proceeded, by 2022 it would add $354 million a year in wages paid to San Diego County residents and $843 million a year to the county's total sales of goods and services. By 2022, the project would also have created 7,362 jobs a year, the report found.

But Cory Briggs, an attorney for the coalition fighting the project, said that report did not include the costs to the city of San Diego, including police and fire protection. He added that the project is not "shovel ready," as its proponents say it is, because all of its funding has not been secured.

Ruben Barrales and Paul Webster, both with the San Diego Regional Chamber of Commerce, said they support the project moving forward and do not think enough has changed to warrant a new round of approval.

"It's the best of both worlds, because you get more public access and people will actually want to go there," Webster said.

A spokeswoman for San Diego City Councilman Kevin Faulconer said Faulconer supports redevelopment of the site and does not want further delays.

She called the site an "island of inaction in a sea of change."

Plans for the complex include an 18-story office building for the Navy; three luxury hotels — the biggest of which will have two 30-story towers, 1,058 rooms, and more than 200,000 square feet of meeting space, ballrooms and spas; and upscale restaurants and stores.

In 2006, Manchester signed a 99-year lease with the Navy for the site, which traded free rent in exchange for building the Navy a new administrative headquarters. That deal was passed on to Dealy Development in 2008.

If the Navy disagrees with the Coastal Commission's decision, the commission can ask for mediation or take the disagreement to court.

Born & Raised in San Diego (1930)-Had our business there for over 50 years--And this kind of stuff was the reason I left my home town!!!! I came to the conclusion that my own city was & still is "Bush League".Very sad--It could have been a wonderful project & great for the Navy & the city. How the CCC gets away with this if beyond me.

Better to scrap the California Coastal Commission than the Navy Broadway Complex. The CCC is an out-of-town partisan politburo who does the bidding of labor unions and consistently oversteps their authority. Nothing about this project restricts the public from accessing the waterfront, and yet the CCC debates all types of other issues to maliciously justify denial. This is the crony government we don't need and demonstrates why labor unions have far too much influence in politics.