In an economy that has produced many start-ups, as some people have sought to turn misfortune into opportunity, Arnold Jaffa, 82, isn't the least bit interested in letting go of what he considers to be a major part of himself -- a desire to help people succeed.

“I wore every single hat in business that you could imagine,” Jaffa, a retired businessman and current counselor for volunteer-based business consulting organization SCORE San Diego, said.

He attended the School of Engineering at the City College of New York and studied atomic physics at Columbia University, but for 31 years -- up until 1980, Jaffa was the owner and operator of the R&S Toy Manufacturing Co. in New York. That experience provided the perspective through which much of the advice he regularly provides his clients. And as the month of July marks 30 years with SCORE for Jaffa, the man who retains three decades worth of testimonials from clients in several organized binders, has no plans of quitting just yet.

“Other than marrying my wife, SCORE has been the love of my life, in helping people, because I know where they're coming from,” Jaffa said.

While he meets regularly with a number of clients in both well-established businesses and start-ups, he has specific advice for each and every client looking to create a business from scratch: research the market being entered and make sure enough money is available to get the business through what can often be a tough financial beginning full of many investments and little revenue to start.

“There are two negatives,” Jaffa said of many start-up proposals he's come across from clients. “One is the lack of a business plan.”

Based on his experience, that's the most important thing he tells clients to have. 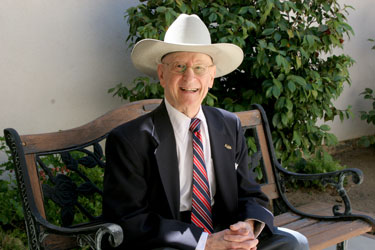 The other leading cause of start-up failure, he said, is undercapitalization. The two negatives work hand in hand, though, as a solid business plan could more accurately project the amount of money needed to operate the business, he added.

Through tough economic conditions, he said the start-up challenges don't discriminate based on age. They’re equal opportunity, he said, and his older clients deal with them just as much as his younger ones.

The older clients do, however, present him with proposals not as often available to the younger ones, such as using money from a 401K or individual retirement account to turn to when few other funding sources are available.

“You have to sit down with them and analyze what it is that they're going to come to market with,” Jaffa said. “Is it unique, different and better than what’s available in the market?”

If the answer isn't known to some of those basic questions, Jaffa advises them to find the answers before “taking good money out of pocket,” and investing it into unknown territory.

“Money is hard to make and easy to lose,” Jaffa said with a laugh.

“Working 9 to 5 is one thing,” Jaffa said. “In business, you take that business to bed with you under the covers.”

But through his 30 years as a business counselor, Jaffa has always maintained that he will never tell someone, regardless of age, that he or she should or should not go into business.

“They have a dream, they have an ego,” Jaffa said. “It's their money, their time, their effort, and they want to market it,” he added, noting that he’s had clients of his successfully starting businesses while in their 60s.

Helping to determine that is a major focus of Jaffa's work when dealing with clients and drafting with them a solid business plan. He said the numbers speak for themselves, which is the overarching reason why he has always avoided telling people what to do.

He also remembers some of the agony he went through while running his toy manufacturing company -- hardly ever seeing his children as they grew up, the 16- to 18-hour days, being the victim of theft.

Since becoming a SCORE counselor in 1982, Jaffa has authored and published two books on how to find success in business. The first, “3-Step Simplified Formula for Successful Business Start-up,” was based on a formula Jaffa conjured, which he believes answers many of the questions asked of how to make a solid business.

How he devised the formula is a story in itself. In 1992, Jaffa was one of many counselors at a two-day business-plan workshop. While sitting at his table, listening to one presenter discuss break-even analysis, Jaffa began to think to himself, and took a break.

“People were frustrated," Jaffa said of the presenter. “They couldn't understand what he was talking about.”

Without a sheet of paper while on his break, Jaffa used a napkin at the coffee set-up in the break area, and began writing his own idea for a simplified solution to break-even analysis. He went out into the hall and approached a colleague from SCORE, looking for her opinion of the formula he had just scribbled on the napkin.

“She said, ‘Mr. Jaffa, this is fantastic,'” Jaffa said. “I went home that day, and I put together examples for retail, wholesale, manufacturing and service businesses.”

He said the formula, which outlines based on profit margins the start-up costs, working capital, and sales needed to make up for expenses, applies to every business without exception. He focuses on the formula in his counseling because he believes it can greatly increase a business owner's view of the business’ potential or weaknesses under various conditions, and tell an owner what needs to be done to meet desired goals.

“I wish to God I had this formula when I started,” he said.

Reading through the scores of testimonials Jaffa has held onto through the years, one can get a sense of his impact on the community.

A week after turning 83, and just following his 30th anniversary with SCORE, Jaffa will again highlight his costing, pricing and break-even analysis formula at an Aug. 11 workshop at National University in Kearny Mesa.

For Jaffa, the desire to help others will only be stopped by a physical inability to do so. And his formula, and his original book have been made available online free of charge on the national SCORE and local SCORE San Diego websites.

“As long as I have the health,” Jaffa said, speaking to how long he plans on being an active counselor. “I never took a penny from anybody,” he said of the book. “I wouldn't even dare to think of taking a penny from anybody -- I wouldn’t have the pleasure of knowing I’m helping people.”

I grew up 3 houses away from Mr. Jaffa, and was friends with his two sons. We still keep in touch after all these years. I can attest to the long hours and days he put in back in the day!

Thank you Mr. Jaffa for your generosity. I need to read your books, and talk to you!