Men go under the knife to get ahead at work

A flurry of patients are waltzing into Dr. Scott Miller’s plastic surgery office, requesting a fresher look. They aren’t trophy wives, but rather an unlikely candidate that’s worried about their appearance: male technology executives.

Some 1.2 million cosmetic procedures were performed on men in 2011, up 6 percent from 2010, according to the American Society of Plastic Surgeons.

“Particularly in this economic downturn, I see people who realize they are going to be working another five or 10 years and feel like they need to look robust," said Miller, the attending surgeon at Scripps Memorial Hospital in La Jolla.

The hot spot is 55- to 65-year-old males that are most concerned about fixing their neck and eyes.

Eyelid surgery was the No. 2 cosmetic surgical procedure in 2011 for men, with about 29,000 procedures, said the society.

Bags under the eyes and hooding above make men not look so much old as tired, he noted. That fatigued appearance could give off the air they are not up for the job. 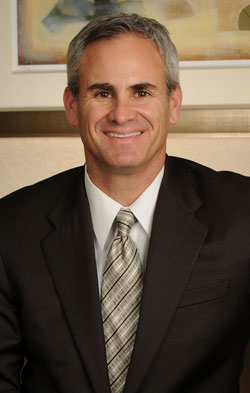 Miller has operated on graduates of the prestigious University of Pennsylvania Wharton School of Business, who decades later realize they need to keep their high-powered jobs a few extra years to ensure a solid retirement.

“They feel that while they’ve got a great gig, they’ve got to keep up appearances and productivity to maintain it,” Miller said.

Droopy eyes aren’t the only flaw looking back at men in the mirror. A waddling jaw line can make them look weak.

“We associate a strong jaw and clean neckline with authority and a certain vibrancy and command," he said. "We choose our politicians and executives that way, so it’s not irrational for people to look at that in the workplace.”

Surprisingly, those wanting the surgeries don't sit at the top of the totem pole at their companies. It’s middle and upper management who want to clean up their image, which includes vice presidents or junior vice presidents.

When someone’s boss is 10 to 20 years their junior, they’re even more self-conscious about every line, wrinkle and sag.

“They don’t want to be the older worker who is dragging things down, when they have a younger, dynamic crew competing side by side with them," he said.

The types of patients he sees are proactive in all other affairs, so being proactive in maintaining their looks is also on their to-do list.

“More and more men are saying, 'I got dressed in a certain way because I want to present a certain image,'” he said. “What’s wrong with looking at some other factors? Those can include anything from teeth whitening to aesthetic surgery.”

He explains why he thinks more technology execs -- notably in the biotech arena -- are going under the knife.

“They feel that in that industry people are looking at your work product and your work style, too," he said. "And appearances matter. They need a more youthful and energetic look."

With an average annual salary of $73,000, technology employees in San Diego have enough disposable income to drop on a pricey procedure that's not covered by insurance.

A neck lift and upper eyelid surgery, when all said and done, can run from $7,500 to $10,000. A patient can get back to their activities and feeling well within a week, and back in the public eye in two.

“With guys you don’t have the luxury of combing your hair over the incision until the incision is a little less pink,” he said.

Occasionally, he’ll see a laid-off employee want to get a procedure done to re-enter the work force with a fresh face.

“They say I’ve been running on a conveyor belt all these years and are going to take advantage of this time,” he said.

Patients have to be patient to see Miller, however. He’s typically booked solid three months out. For many, it’s worth the wait.

Miller is highly skilled at facelift procedures, in part, because he learned from the best.

In 1997 he scored a coveted post-graduate fellowship with Bruce Connell in Orange County. Now retired, Connell was considered one of the premiere plastic surgeons in the world.

“There are certain names in any field everyone knows. He was one of those," he said. "He was operating on plastic surgeons from all over world. Prominent people would fly in from all over the world.”

Studying Connell's steady hand for a year taught him many techniques and tricks of the trade that can be translated into contemporary practices.

"I also gained confidence. I know what I am doing is as good as it gets," he said.

A high-quality "facial rejuvenation" procedure from Miller -- which can include a face lift, chemical peel and lasers to erase deep wrinkles -- can cost between $10,000 to $20,000. It's not cheap, but those who opt for a Rodeo Drive name sometimes end up paying a third more for the same high-end surgery.

The huge density of wealth in Los Angeles, as well as high rents, inflate the cost of procedures. Some of L.A.'s image-conscious crowd has caught wind of the price difference and makes the two-hour drive to see Miller.

"We did the same training, we have similar philosophies," he said, comparing himself to Beverly Hills surgeons.

His plastic surgery residency at the University of California, San Diego, School of Medicine, first brought him to San Diego in the mid 1990s.

The Las Vegas native said his job is a combination of three of his talents: surgery, painting and tennis.

“You get a good night’s sleep and bring your A game. Plastic surgery has that artistic part a lot of other parts of surgery don’t have," he said. "It’s very creative and innovative, in coming up with a unique and special plan for each patient.”

Going under the knife for a cosmetic procedure is a buyer beware situation, and he discourages patients from settling for what he calls "franchise facelift" operations, which are performed by doctors who don't have to be board certified in plastic surgery.

Botched jobs give plastic surgery a bad name, and upset patients then come to Miller to fix the mistakes.

"People need to do their homework. First you have to figure out who took the time and gave up a quality of life to do the training and then you work from there," he said.

Isn't it a shame we have become so superficial that in much of today's society appearance matters far more than brains and ability.