By JILL BLACKFORD, Special to The Daily Transcript
Wednesday, March 16, 2011

William Driscoll, Cdr., USNR (Ret.), believes in the power of teamwork. When he was on active duty as a Navy Radar Intercept Officer (RIO), it was a matter of life and death.

“You’re in the cockpit, it’s hot and sweaty, and there are nine computers with 80 displays and 300 switch positions,” said Driscoll. “It’s technological overload, and it’s just you out there against the enemy. You may be winning against one, but three others are there to shoot you down.”

Driscoll’s role as an RIO was to read, interpret and convey to the pilot flying in a two-seater fighter plane what was on the radar, in a constant back-and-forth. This required complete trust in working with one another to not only make the right decisions -- but to also judge the combat landscape accurately. During the Vietnam War, Driscoll and his flying partner, former Congressman Randy "Duke" Cunningham, became the Navy's only two flying “aces,” an aviator who shoots down five or more enemy planes in air-to-air combat.

“It requires a very strong sense of trust because we’re asking each other the same thing: Can I trust you with my life? In other words, I better doggone be right in what I’m interpreting, because how the dogfight unfolds is based on how we set it up,” said Driscoll. “The second question we ask is: Can I count on you to do the right thing, at the right time, for the right reasons no matter what? And three: Are you willing to live by and be judged by higher standards than anybody else? What we’re talking about is integrity. With it, nothing else matters, and without it nothing else matters.”

Driscoll retired from active duty in 1982 and joined the private sector work force as a commercial leasing agent for CB Richard Ellis Inc (NYSE: CBG). However, just a year after his Navy retirement, Driscoll was asked to return to the reserves, and he’s been continuing his air combat training work ever since. This includes educating the next generation of RIOs, now known as Weapons Systems Operators (WSOs), at TOPGUN as well as speaking and flying the strike at TOPGUN graduations. Now that Driscoll is also retired from CB Richard Ellis, he’s using his training skills more directly in the private sector: He started his own public speaking business about five years ago to share the strategic insights gained in the air. 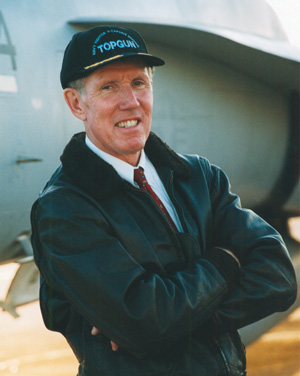 “I offer the techniques today’s fighter pilots use to achieve their goals no matter what. Because of the economy, people want even more information in terms of how to get through challenges, how to have a balanced life, how to take care of their health, and how to not be wired so tightly with all the things they’re bombarded with,” he said. “Very simply, it’s about how to maximize peak pressure performance.”

In preparation for starting his business, Driscoll interviewed 26 ace pilots from World War I through Vietnam -- with a total of 212 shoot-downs and more than 1,000 combat missions among them -- to learn how they succeeded in the high-octane stress of combat.

“One of the things I’ve always been fascinated with is that aces are less than 4 percent of fighter pilots, but they account for greater than 40 percent of the shoot-downs,” Driscoll said. "And the question that lurked is: How come that happened? What do they do differently?”

What Driscoll found is that those who have achieved ace status have a different approach to training and flying. Despite Hollywood’s macho, hard-living portrayal of fighter pilots, Driscoll says ace aviators also take good care of themselves. Two perhaps surprising commonalities among them: balance and humor.

Driscoll has been on 170 combat missions and in more than 5,000 jet dogfights during his Navy career, going up in the air two or three times per day while in active duty. He’s been awarded the Navy Cross, two Silver Stars, a Purple Heart, 10 Air Medals, and was nominated for the Medal of Honor, making him one of the highest decorated living Naval flight officers today. Driscoll also became an instructor at the U.S. Naval Fighter Weapons School—better known as TOPGUN.

“As a TopGun, we train the finest Navy fighter pilots—think of it as the Harvard Law School of air-to-air combat. Recognize that we were teaching fighter pilots to go into air combat and wanted to make sure they knew how to fly airplanes one inch from out of control,’” said Driscoll. “A combat dogfight brings every emotion known to humans. It’s a vicious, violent encounter—and only the strong survive. You can think of it as gladiator work; you’re going to fight till somebody gets killed, unfortunately. The only rules are that there are no rules.”

“I have huge respect for all pilots, but aces seem cut from a different cloth,” said Driscoll. “They are very disciplined, and 24/7 they were very focused with a burning desire to be the best they could be. I share with audiences how they got focused, got better and came back king of the hill -- then once they got there how they stayed there. They do what they do in a focused way, but they don’t take themselves too seriously. I don’t know that I’ve ever talked to an ace that ever had trouble sleeping the night before combat.”

Driscoll gives about 40 speeches a year, primarily in the United States, and most of his clients fall within the financial services and defense industries. A few key clients include Alexandria Real Estate (NYSE: ARE) and Southern California Edison.

“There is a need for more team-building now as assignments are more complex in order to service clients’ needs, and that’s exactly what we did in the military. We looked for the best teams, the best leaders, and people you could count on in a pinch to do what they say they’ll do. All the things that made for successful fighter pilots are the same ingredients for making people good at what they do in the financial services industry,” Driscoll said.

As for what differentiates his message from other speakers out there, Driscoll highlights the value of translating the real-world strategies of aviator combat, from multitasking to prioritizing, to the business world.

“I say with huge respect that others do a fine job, but when people listen to me, they’re not listening to somebody who has a number of fancy degrees but to a real trigger man. I am one of the most highly decorated aviators in the last 50 years, and I got hit, was on fire, and was still within enemy territory,” said Driscoll. “I’m not giving research, theory or what sounds cool from an academic perspective. I’m speaking from a real, gritty, fingernails-dirty perspective, with scars on my face from where I was cut on the canopy of the plane when it was on fire. I have huge respect for other speakers, but with me you’re getting the real deal.”