By PADMA NAGAPPAN, Special to The Daily Transcript
Wednesday, April 27, 2011 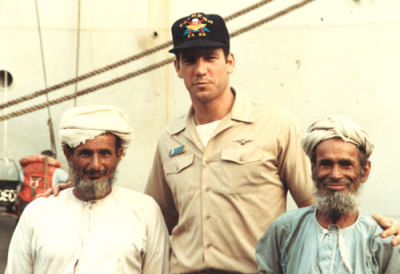 "You plan your flight path in great detail, but missions never go as planned -- you learn to change course as needed. Business is that way too."

John Frager knew at an early age that he wanted to join the U.S. Navy and be a pilot, inspired by his father, Jack Frager, who flew an F-9 Cougar. He decided he wanted to follow the same path after watching the video clips his father made to show him what he did.

He almost got kicked out of the naval aviator training program for an unusual reason -- being too tall. He is 6 feet 7 inches tall and the height limit to fit inside the cockpit of Navy jets is 6 feet 4 inches.

But growing up, his father shared his experiences and told him stories about life in the Navy that made him yearn to do the same things.

"The biggest lesson I learned from my dad's naval career was hard work. He was always up early. Always kind to everyone, he believed in servant-style leadership," said Frager, who now is now the executive managing director of office services for the Americas with commercial real estate firm CB Richard Ellis.

He characterized his leadership style as being similar to his father's and the Navy's -- servant-style leadership where you work hard, understanding the people you represent and their needs.

Frager joined right out of high school at an unpopular time, filling out his paperwork for the Navy ROTC in 1975. When he went to the University of Southern California, he was already 6 feet 4 inches. By the time he left for training in Pensacola, Fla., he had reached his present height of 6 feet 7 inches.

"About three-quarters of the way through my primary flight training I was busted by a flight physiologist who knew I was way too tall. Because of my good flight scores up to that point, I received a waiver to proceed," Frager recalled.

He said he practiced hunching and, after being measured, asked if he could fly an older plane, the T-28 Trojan, because it had a roomy cockpit. But he could not fit comfortably in most Navy jets, although he liked flying them, and eventually was assigned to an H-46 helicopter.

He requested San Diego and was sent to Coronado for his first posting. He served active duty from 1980 to 1986 and was in the Navy Reserve for two years after that, but did not see combat. He was sent to the Asia Pacific region, Japan and then Guam, where he was part of the very first forward deployed H-46 squadron.

His commanding officer was Randy Bogle, a San Diegan who was a huge influence on Frager, setting an example by working extra hard and expecting the squadron to put in six-day workweeks.

"He made us feel very proud of our role in the Navy. We lost a copter and two crewmen due to mechanical failure. I admired his leadership throughout the crisis -- how he handled the families and our squadron," Frager said.

Iran's Ayatollah Khomeini was a threat during the 1980s, which was why Frager's squadron was sent to Guam, so they could patrol the Indian Ocean and service an aircraft carrier battle group. The pilots flew in food, ammunition and spare parts.

When he got out, staying in San Diego was important for him, which led him to real estate. He said training was highly important for a new career and CB Richard Ellis offered excellent training, recruiting a lot of naval aviators at that time.

The transition was fairly easy he said, since he found the work culture at the brokerage to be similar to the fraternal atmosphere in squadron -- teamwork, accountability and discipline.

"You tend to hold very high levels of authority and responsibility at a low-level rank. That's why military vets do well in business," he said.

Working in teams in the Navy came in handy in his second career, where he had to collaborate with other brokers. Another aspect of his naval career that helped in business was that he was already familiar with a range of electronics and personal computers just when the industry was beginning to adapt those new technologies in the late 1980s.

"Methodical training kicked in and helped when I tackled new projects. We learned that careful planning is a part of good leadership. Also, you plan your flight path in great detail, but missions never go as planned -- you learn to change course as needed. Business is that way too," Frager said, drawing parallels.

From his time in Guam and Saudi Arabia, he learned that the important thing in any new situation was to determine the ground reality and assess where he could be of value.

He spent 10 years as an agent with CBRE and climbed the ranks to management from 1996. The firm sent him to head branch offices in Sacramento and Denver, before his current position.

Frager said the business is always evolving and is competitive, and part of his focus is on training the next generation of leaders. His tips for them?

"Learn to ask good questions. You don't have to have all the answers, but you need to know how to ask the right questions with clients and staff -- like a good doctor who diagnoses symptoms," he said.