By CLAIRE TRAGESER, The Daily Transcript
Wednesday, May 4, 2011 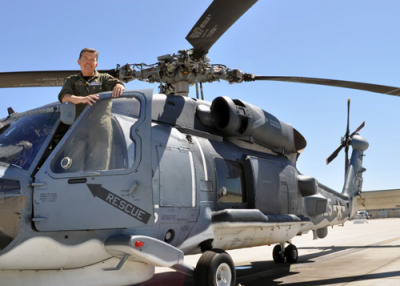 When Rear Adm. Pat McGrath was a sophomore in high school, he walked into his guidance counselor's office and saw a stack of binders that listed any and every possible career.

They were marked A-G, H-L, and so on, and McGrath pulled down the first thick book and opened it.

McGrath was sold, and his life was never the same. Now the 53-year-old splits his time between work as a deputy district attorney for San Diego County who heads the family protection unit and as deputy commander of Naval Air Forces.

"Most people would consider it a great accomplishment alone to serve the people in a role as deputy district attorney, but for Pat to do public service in the military at same time is remarkable," said District Attorney Bonnie Dumanis. "When I see him work with victims who've been seriously traumatized, he has shown compassion and understanding, and I think that compassion is a function of what he's seen through the military as well as what he's seen through our office."

McGrath grew up in New York City as one of five children in a family without much money. He knew paying for college would not be an option, so he opted to go to the U.S. Naval Academy. He graduated in 1979 and then moved on to flight school at Naval Air Station Pensacola.

In 1981, he came to San Diego and spent the next nine years on active duty. He completed three tours, including one as a cold warrior, which he said involved "helping chase Russian submarines off frigates and destroyers." He was also deployed to the Persian Gulf aboard the USS Kincaid.

"I would escort convoys of tankers going through the Strait of Hormuz," he said. "I'd be 7,000 feet in the air in a helicopter in front of a ship to act as an early warning in case someone bad came down and tried to do something to those tankers." 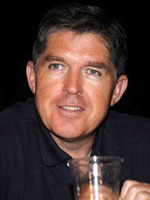 But he also knew he needed more of a challenge.

"Someone told me really early on that I ought to start something while working as a flight instructor, either running a marathon, lifting weights, or getting a master's degree, so that at the end of the tour I would have progressed in some way," he said. "Being a flight instructor is challenging, but at some point you'll get it, and you won't be progressing anymore."

McGrath took that advice seriously and opted to take a law class at the University of San Diego School of Law. But he quickly found out he had to either go all in or go home.

"I didn't know you couldn't dabble in it," he said. "They gave me a full schedule of classes, and I said, 'you don't understand, I just want to take one class.' But I talked to my wife and we decided to see how it shakes out."

Aside from some sleep deprivation, it shook out just fine. McGrath was a flight instructor during the day and went to law school at night. Since graduating law school, he has maintained that double life, working primarily on child abuse and domestic violence since joining the District Attorney's office in 1992 while also being commissioned in the Navy Reserves.

He returned to active duty in 2008 and is now helping to organize and run the Navy's Centennial of Naval Aviation celebration.

McGrath said efficiency is the key to doing both jobs, and learning that skill has continued to serve him as he balances both careers.

"I don't spend a lot of time chatting with people; I come in and do what I need to get my work done," he said. "It's the same thing with the Navy."

Because he also has a wife and two children, 12 and 15 years old, McGrath has a third juggling pin to keep in the air.

"I have two kids, and I don't short shrift them either," he said. "I work until 5:30, go home and have dinner, hang out with my family, and then I work again when they start doing homework. I'm not above TV; I just don't have time. In the evenings I go through Navy stuff to make sure I'm up to speed with things."

Although the two sides of his career leave him with little free time, McGrath said splitting himself between the Navy and law work has made him better at each.

For example, the Navy taught him to manage stress and put his courtroom work in perspective, he said.

"When I started in the DA's office, that stress or that fear of not performing can debilitate people, but the way I viewed it, I was not going to crash or run out of gas in a helicopter and die," he said. "So with that perspective, I knew I just had to make sure I did things right. It made me very comfortable early on being in the position to be the person to have to make a decision, and I think that has served me well."

And in his current role as head of the family protection division, the decisions he has to make are big.

"When you decide who goes to jail, or who stays in jail, if you really think hard about it, you make calls all day long that are monumental to the people involved," he said. "I have to keep reminding myself how big those decisions are, so I wrestle a lot with what's the right thing to do."

But McGrath's experience in the military has enabled him to make the tough calls.

"I think that the experiences I had all throughout my time in the military helped me be comfortable making calls on really important issues, to know how to weigh both sides of an argument and make a decision based on facts, not on emotion or pressure," he said.

McGrath has come a long way since that day in his high school guidance counselor's office, climbing much higher than his dreams of piloting airplanes.

"There are things I did with the military that are extraordinary life experiences I could never get anywhere else," he said. "Then I also come to the DA's office and help some 6-year-old get through a really terrible thing or put some real bad people away for a long time.

"When I go home, I know that I did something really good."