"There's something (about) managing in the military ... It's to protect this nation and our way of life."

Henry J. "Jim" Bedinger likes to serve those who serve. Whether it's through his work at Navy Federal Credit Union, or with about a half-dozen military-oriented nonprofit groups, he tries to make life easier for soldiers, sailors, Marines and airmen.

Sometimes, he'll work extra hard to help someone qualify for a loan. Other times, he'll organize well-wishers to greet ships coming back into San Diego Bay after months at sea.

Then there are the times when he will relate his own experiences in combat, which include hardships most people can scarcely imagine. He helps others by telling them how he managed to get through it and get on with life.

"Three years, four months and 19 days," Bedinger said, when asked how long he spent in Hao Lo Prison, the infamous "Hanoi Hilton" where the Viet Cong kept many prisoners of war during the Vietnam War. He remembers the time exactly. He said nearly every day he thinks about an expression a fellow POW came up with: "Freedom is having the door handle on the inside."

"Every morning, I wake up and I realize I have another day in this world and I don't have to sit looking at a door with no door handle," he said.

Bedinger was a lieutenant and an aviation navigator in the U.S. Navy when he was shot down and captured in Laos and brought to Hao Lo Prison in Hanoi in 1969. He endured years of physical and psychological torture, determined the enemy not use him for propaganda. Some of his fellow POWs included Arizona Sen. John McCain, the Republican nominee for president in 2008, and James Stockdale, who would go on to become a vice admiral and a vice presidential candidate in 1992. 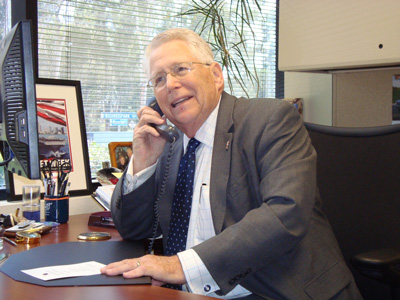 Quick with a smile and warm handshake, Bedinger now speaks openly about his POW experience. He has given talks about it with faith groups and other audiences as an example of an immense hardship that can be survived. While he still becomes emotional at some recollections, he largely uses the ordeal to illustrate things he learned about human nature, courage, faith and leadership.

Bedinger's years as a POW were a significant part of his life, but he seems to prefer being defined by his family and his later work, both in the military and the private sector, than those three-and-a-half years in the late 1960s and early '70s.

"It is a life-changing experience, there's no question about it. To have everything taken away from you makes you think and reflect," he said. "No one man is an island. We all need each other."

The men in Hao Lo also led each other.

He gave one example that involved McCain. One day, Bedinger and his cellmate, Ernest Brace, were stuffing notes into the drawstrings of clothes so they could be sent to the other POWs as a means of communication when the prison guards launched a surprise inspection. Knowing what Bedinger and Brace were doing and seeing the approaching guards, McCain began yelling and screaming to distract the guards and warn his comrades. Bedinger and Brace quickly swallowed the notes, and the guards found nothing.

"They took John McCain away for two weeks and put him in a very small jail cell. The average temperature at that time, in the summer, was about 120 degrees inside the room. He was put in shackles, his feet were put in these kind of mobile stocks, and his neck was tied to a ring behind the wall in the daytime, and they let him lie down at night. He lived like that for about two weeks, so that Ernie and I wouldn't get caught," Bedinger recalled. "That's leadership."

Bedinger was released from Hao Lo and returned to the United States in 1973. He went back to school, earning an M.B.A. from San Diego State University in 1976, and then went back to aviation, flying in F-14s in Pacific and Mediterranean operations. After that, he went to work for the Navy's controller office in the Pentagon, serving in the Congressional Liaison and Budget Division. He finished his career as the comptroller at NTC San Diego before retiring from active service as a commander in 1989.

In 1992, Bedinger went into the banking field with USA Federal Credit Union, which merged with Navy Federal Credit Union in 2010. Bedinger's title is member outreach manager, where he often helps translate military situations for the financial institution, and tries to find ways to make the credit union work better for its serving members.

He said he likes to use his job to help service members by translating military life to the banking community. He understands long deployments can cause service members to lose track of their finances, and the go-for-broke attitude created by surviving a tour of duty can lead to impulsive spending decisions. He tries to help educate both the bankers and the service members on how they can do better by each other.

Bedinger likes to tell the story of a Navy chief he encountered during his first year at USA Federal. The man's second wife had rung up a huge credit debt and he needed a loan to pay it off so he could move on with his life and marry his third wife, "the love of his life." The bank was suggesting the chief file for bankruptcy instead.

"(The chief had) two Purple Hearts, two Silver Stars, five Bronze Stars and he was the leader of special operations teams," Bedinger recalled. "His exception letter said, 'I've never left one of my men behind and I will never leave a debt with a credit union behind.'

"I read that sentence and I went up to the president (of the credit union) and I said I'd stake my entire paycheck and other paychecks on this," he continued. "The loan paid off early."

Through his work, he helps injured soldiers and sailors, organizes welcome parties for ships, assists families on the home front and gives awards to outstanding service members.

"It's hard not to get involved helping all these groups at a time when our military is being called upon to do so much for so long," he once said.

Bedinger has experienced extremes in leadership few people ever will. Beyond the intense examples he saw in Hao Lo Prison for more than three years, he has also seen the more subtle differences between the military and the private sector. The basics aren't too different he said, but he thinks the military takes more personal care with its members because it has to. If a service member isn't contributing at a high level, it's their commanding officer's responsibility to improve them for the good of the team. A company can just get someone else.

"There's something (about) managing in the military, where you're serving in something bigger than yourself, and it's not for a profit, it's not for the company taking over a market share. It's to protect this nation and our way of life," he said. "And when you get involved in that effort, it's not a job. It's a vocation."

Hello Mr. Jim Beddinger, I am a representative of the US Veterans Magazine, I have some questions to ask you, would you please return my phone call at 800-487-5099 Thank you very much